Adventures of the Chaotic Goddess 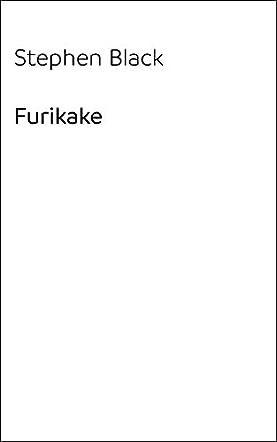 Thank you very much for your interest. For Furikake,I have been honored to receive 5 stars from a reviewer who understands what I do.My other projects are easy to read, I hope, but not so easy to describe. As for me, you can Google "Stephen Black" if you really want to know about my lives as an artist, photographer, videomaker, producer and maker of thumb-shaped kways.
I have books on on Google and there is this: https://www.facebook.com/media/set/?set=a.348720038540197.88537.343618745716993&type=3
Thanks again.
Stephen Black

"Furikake" is a Japanese condiment which is a mixture of seasonings normally sprinkled on rice to enhance its taste. It is also the title of a book that contains nine stories and essays seemingly united by this Japanese word. The stories are 'Yumoto Near Clementi', 'Writing Furikake', 'Two K,L.s', 'The Eye of Flesh', 'Variety is the Spice of Life', 'Furikake on Facebook', 'Puccini Liked it on Ham', 'Who Will Bite My Head?' and 'Furikake and Rojak'.

'Yumoto' is actually a touching love story that is told simultaneously with a review of four Japanese restaurants. 'Writing Furikake' is a hilarious, apologetic letter to the reader explaining the author's obsession with the word itself. 'Two K.L.s' is another witty essay that plays on the various meanings of the initials KL. 'The Eye of Flesh' is a take on camera, food, as well as dreams. 'Variety is the Spice of Life' is a story told by transcribing an audio recording that ends in a disturbing note while 'Furikake on Facebook' is an essay told through various posts on Facebook that extols Furikake, its origin and its many uses. In 'Puccini Liked It on Ham', we learn that Furikake had a crucial influence on the tragic Japanese opera 'Madame Butterfly'. The story told in 'Who Will Bite My Head' traces the trail of a photocopy from Tokyo to Singapore with some nostalgia for hotel Mitre.

The rest of the stories and essays in this book are just as hilarious and witty. The author, Stephen Black, writes in the first person singular so that when I read his work, I got the feeling that he is talking directly to me. On the other hand, he seems to go into an interior monologue with his stream of consciousness spilling all over my head like a broken dam. Reading him carefully, I realized that at the beginning and the end of his work, there is an apparent attempt at organizing and summarizing and this is perhaps where the thoughts of the narrator are actually revealed. Living in many countries and finally settling in Singapore, the American writer gives us a glimpse of the city state that is both honest and unique. His flow of impressions and perceptions can be overwhelming but they are always witty, humorous and laden with a good dose of irony. The author's consciousness may seem disorganized at first but his book is actually an organized presentation of his rational thoughts on the culture of life, love, death and Furikake, of course.