Love at the Salted Caramel Cafe Galaxy Mole and the Shadow of Fear 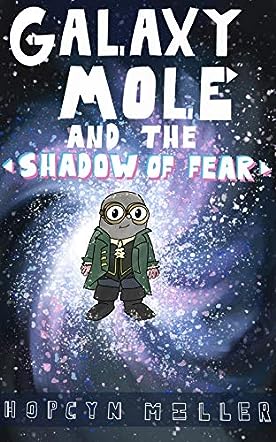 Galaxy Mole and the Shadow of Fear by Hopcyn Miller is a complex sci-fi/fantasy novel, classified as “young adult” sci-fi, but it is a lot more than that. There are parts of it that would appeal to young children of ages 6 to 10; some parts that are quite adult; and most of it would appeal to any age group. The plot revolves around an environmental disaster in the making, engineered by a greedy industrialist, Denton. His adversaries are three space patrol characters: Byron, Marlow, and Shelley. The part that would appeal to very young children is the fact that all the characters are different animal species, like a mole (Byron), a chinchilla (Marlow), and a squirrel (Shelley). The action takes place on Tellus, in deep space, and on another planet, Mu Leonis, populated by a hostile alien species, the Raselas. There is a spiritual element, the Way, that plays an important role in the narration, providing a mysterious and all-encompassing view of existence and Byron needs to master it if he wants to save Tellus from destruction.

You have to pay attention in reading Hopcyn Miller’s Galaxy Mole and the Shadow of Fear because of the complexity with several subplots evolving on many levels. The writing is clear, using a well-developed vocabulary suited to the wide variety of topics covered. What I was most impressed with was the descriptive style, quite poetic at times, paying impressive attention to details of color and texture, so the reader feels like part of the scene. The plot seems to be going on and on with unexpected twists and turns, partial victories, and then frustrating setbacks - it is a real roller-coaster ride, keeping the tension high. The part that should appeal to any age group is the novel’s focus on the environment and the ecological reality of our own planet and the passionate defense of our natural environment, more and more threatened by corporate greed and irresponsible life choices of the citizenry. It is a must-read for anyone who wants to see the ugly reality of our assault on the natural world and be inspired to defend it.