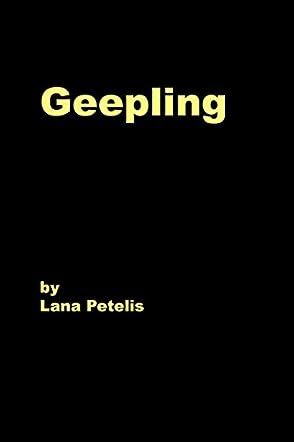 The joy of writing has always been a favorite pastime. As a young girl, writing stories was fun, but my favorite has always been poetry. Like a tool I used the writing to describe the world around me. So I incorporated my love of poetry into the stories I write.

Geepling is a romantic fable for young adults written by Lana Petelis. Geep was a rare and special being; his mother was a sheep and his father a goat. He had no recollections of his father, but his mother was there for him from his first memories. She brought him to the Friendly Utopian Farm where she knew they would find a safe haven, but she was all too aware that life would be difficult for her little boy. Geep had qualities that Jim, the owner of the farm and the man who took care of the inhabitants, admired. He was a handsome creature, but Jim bemoaned the fact that all his good traits could never be passed on to his offspring. Geep, after all, was a hybrid and would never have offspring. The other animals at the farm sang a song about him to their young ones. It described him as a thief, as someone to avoid. For a female, being with Geep would mean no life line extending beyond her own. Geep's mom had died shortly after she brought him to the farm, so Geep's life was a lonely one. His only friend was the mule that worked on the farm, and Geep knew instinctively that Shara, the sheep he couldn't take his eyes off, could never know how much he cared about her.

Lana Petelis' romantic coming of age tale, Geepling, will speak eloquently to anyone who's ever felt different, or been excluded by those considered normal or belonging to a group. Geep's loneliness is a tangible thing that transcends the fact that he is a goat-sheep hybrid, and that his wise old mentor is a mule. Mule's teachings speak of other types of legacies, of transcending the biological imperative of extending one’s life line through procreation. Mule, another sterile hybrid, gives life through his teachings, and he opens the eyes of Geep and the other young ones at the farm to alternative ways of thinking about the world and one's purpose in it. Geepling is one of those disarming little fables that has at its base some hefty thought-provoking and eye-opening wisdom to impart. And, yes, there's a sweet and quite forbidden romance threaded through it as well. Geepling is special, and it made me ponder the wisdom imparted and also smile, which is very nice indeed. It's most highly recommended.

Geepling by Lana Petelis is a story that explores the themes of life’s purpose, fairness and unfairness, and relationships between strong and weak. Geepling is a rejected cross between a sheep and a goat – rejected by both other animals and humans. The other animals fear him and the other hybrids. Geepling learns the reason for this and the way Mother Nature works. From his initial feelings of inferiority, he learns from new and wise friends, Mule and Shara, about life, himself and his place in the world. Tragedy strikes, but Geepling discovers life has a way of changing direction and offering chances and opportunities that can lead to happiness after all. But will he be brave and wise enough to take them?

Lana Petelis’ Geepling is a well-written short novel with a thought-provoking message. Writing in third person point of view, the author uses animal characters to explain and explore the causes and effects of nature’s natural selection. The reader discovers what is behind the discrimination and fears of those who exclude others. Geepling discovers how words impact on and affect others, often shaping the future. Parallels can be drawn between the restrictions imposed on his parents’ lives and his own and human communities and behaviours too. I liked the character of Geepling, and it is easy to understand his desire to keep to himself so that he feels no pain, but this can lead to self-absorption. I loved the story’s hopeful ending with the realization that it is love that matters most and can enable physical and emotional healing. I found this a thoughtful story, told in a fable style, with different levels of meaning and comparisons suggested between the lives and plights of animal characters and humans.

“Mother Nature gives rise to some yet restrains others…” In Lana Petelis’ Geepling, a tale of an orphaned hybrid farm animal, we find no truer words ever written. Geep grows up at Friendly Utopian Farm, not mingling with the other animals nor learning a trade, but in a solitary existence in his secluded barn unit close to Mule, who shares a similar background. Geep is ridiculed by Rem, a magnificent ram, and shunned by the goats and sheep who follow Rem’s example. Until he learns of his parents' transgression to cross-breed out of love and not need, Geep is ignorant of the prejudices of Mother Nature. With Mule’s encouraging words and sheep Shara’s undying affection, Geep learns the true meaning of love and the importance of remaining true to oneself. As Geep’s faith in Mother Nature is restored, we see an emergence of acceptance of the differences in this world.

Geepling (a remnant of a brief love) by Lana Petelis is a modern day metaphor that tells the Romeo and Juliet story of a hybrid goat sheep mix and the most beautiful ewe on Friendly Utopian Farm. We have heard the story multiple times. This version is an adult story book that combines Petelis’ command of the English language in a lyrical masterpiece that includes life lessons in a most nontraditional manner. In a story based on themes of unrequited love, social prejudices, and racial intolerance, I envision Geepling becoming instrumental in college literature courses across the world. Lana Petelis has proven herself a worthy philosopher of the written word. A beautiful story. I loved the language.