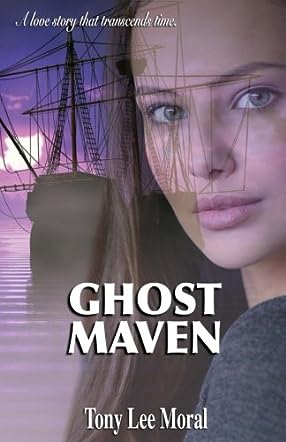 Ghost Maven by Tony Lee Moral is an adventure about faith, life, and death. Alice is rebuilding her life with her father and sister after the death of her mother. She's made a few friends, and even attempted a kayak trip in order to conquer her fear of water. A sudden fog rolls in, capsizing Alice, only for her to be saved by a mysterious boy named Henry Raphael. Waking up on shore, Alice discovers that no one else saw the boy that saved her from drowning. When she sees him again, she finds more than love, but a centuries-old secret. Henry is stuck on another plane after disappearing in a shipwreck over a century before, but Alice is determined to be with him. However, Henry's old crew have other plans for the couple as Henry's past mistakes come to light, and the crew's captain decides on vengeance.

Ghost Maven is a supernatural mystery, a coming of age story with romance, faith, and hope. The biggest theme in the novel is what it means to be alive, focusing on Alice as she tries to navigate her grief for her mother, her new relationship with a ghost, and her family. As history, a curse, and ghosts plague the town, life and death are tackled in a unique way. Tony Lee Moral doesn't shy away from his characters questioning belief, and they are confronted with whether they need to see to believe, or believe to see. The plot comes full circle by the end, but the last page will leave you wanting more. It's clear this is just the beginning for Alice. Ghost Maven is a must-read with strong prose that carries an eerie undercurrent, slowly delving into details as the mystery unfolds.