The 5 Core Conversations for Couples

by Julie and David Bulitt Gift-Wrapped in a Kilt 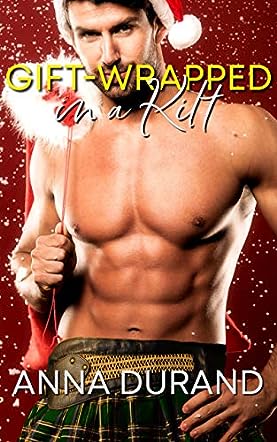 Anna Durand is an award-winning author of sizzling romances, including the bestseller Scandalous in a Kilt, a bronze medal winner in the 2017 Readers' Favorite Book Awards. The Hot Scots series emerged out of a love for all things Scottish she inherited from her late father. While she researching a planned Scottish historical romance, she realized she really needed to write a hot Highlander romance ASAP. A new series was born!

Gift-Wrapped in a Kilt: Hot Scots, Book 4 is a sizzling novel of romance written by Anna Durand. Gavin Douglas had taken the love of his life, Jamie MacTaggart, to a romantic outdoor cafe with every intention of taking that engagement ring in its velvet box out of his pocket and proposing to her. Instead, she watched horrified as he tossed a credit card on the table for frequent flyer miles. It was supposed to be a joke based on the couple’s long-distance relationship between Scotland and the United States, and it failed miserably. Jamie was heartbroken and Gavin more confused than ever. He had lost his job, and his savings had dwindled down to nothing while he was courting Jamie. The MacTaggarts were all so successful, and Jamie’s three older brothers had been rather obvious in their disapproval of the relationship. But Jamie and Gavin were crazy about each other. Emery MacTaggart, the wife of Rory and sister-in-law to Jamie, is convinced that these star-crossed lovers really are meant to be together. She thinks she can juggle things just enough to make it happen.

Gift-Wrapped in a Kilt is a marvelous continuation of the author’s MacTaggart family saga. I’ve read each of the preceding books, and was pleased to discover a new addition. Gavin was introduced in a preceding book, as he is the brother of Calli, wife of Aiden MacTaggart, and I remember thinking he was a noteworthy character at the time. This book adds further dimension to his character and highlights the stresses of long-distance relationships. Durand also expands on Calli’s story as Gavin’s sister and the difficulties in both of their lives after their parents’ passing. Durand’s story has an entertaining plot, and her steamy interludes are well-written descriptions of lovemaking enjoyed by loving and committed couples. While not suitable for those who like their romances squeaky clean, the Hot Scots series has been a celebration of healthy relationships between loving adults written in a tasteful and compelling manner. I was pleased to see that a fifth installment in this series is planned and I look forward to reading more about the MacTaggart clan. Gift-Wrapped in a Kilt: Hot Scots, Book 4 is most highly recommended.