Girl on the Right 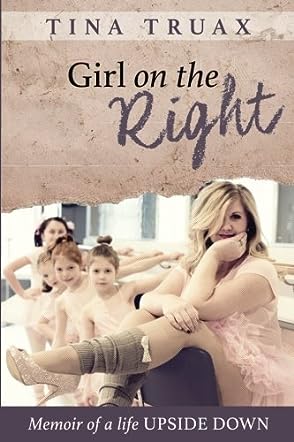 Tina Truax is an author, entrepreneur, child sexual abuse survivor, and advocate for women and children.

At age 6, Tina was gifted a copy of Shel Silverstein’s book, A Light in the Attic. Through his poetry, she discovered the healing power of prose, and tried her hand at putting pen to paper. Many years later, Tina has found success as an award-winning author of personal essay, poetry, and fiction.

The culmination of years as a marketing and public relations executive and published author, Tina founded Girl on the Write Publishing in 2016. As an independent book publisher, her goal is to provide women a platform to share personal stories of how they went beyond surviving trauma, and are thriving in lives of passion and purpose.

Girl on the Right: Memoir of a Life Upside Down is an autobiography written by Tina Truax. The author knew she was not the brightest, most wonderful child in the world. Her father had made sure she realized those facts, first in the way he spoke to her, and later, in her eyes at least, by his desertion of her when she was very young. But she also knew she had something special -- a gift with words; she could create worlds with her words, and she could eloquently communicate her vision to others. Truax was a survivor of sexual abuse, beginning from when she was only four years old, and she had had to carry those experiences with her as she was growing up. She also learned that her volatile mind swings and ability to swiftly change focus were, in part, the result of her having bipolar disorder. This book, which frankly and fearlessly shares her earliest memories as well as her current life, had its genesis in her response to a poster that showed one non-conforming little girl at a ballet barre, who was steadfastly to the right of the other four girls. She immediately related to that simple, yet elegant, oppositional stance and decided to share her own story.

Tina Truax’s autobiography, Girl on the Right: Memoir of a Life Upside Down, is a well-written and engaging account of the author’s life, and her acceptance of the fact that, no, she was not like everyone else. I had a marvelous time getting to know Truax and empathised with her early efforts to conform and do the right things. Truax is a survivor, having overcome multiple traumas, each of which might have felled hardier souls, and her ability to get past them and recount them is impressive indeed. There’s a lot in this memoir -- discussions of weight and body image issues, the pros and cons of organized religion, and how confidence, self-esteem, generosity and courage can all be gained, no matter how far along life’s path one might be. Truax’s story is bold and inspiring, and her lively presentation keeps the reader wanting to read more. Girl on the Right: Memoir of a Life Upside Down is most highly recommended.

A brilliant book beautifully written. I cried and laughed and really felt Tina's struggles and triumphs as I relived them along with her as I read each page. This book delves into issues not many really want to talk about. I think Tina is incredibly brave and courageous to share her most intimate life moments. This book really opens a dialogue to discuss issues that are painful and dark. I think this book may help many heal and may change others completely. I absolutely loved this book and look forward to reading more from Tina.

I received the book, I opened the book, I read the entire book; all in an evening! Tina, you write truth from your heart in order to heal yourself but most especially to heal others. Awesome!!

This powerfully candid memoir discusses significant themes in the author's childhood and journey into adulthood. It touches on painful experiences such as sexual abuse, rape, an unplanned pregnancy and abortion, a troubled marriage and divorce, the raising of a son on the autistic spectrum and a sensitive precocious daughter. However, it is not a tale of woe; rather, it is a story of discovering one's true self, talents, and strengths.

Tina Truax writes clearly, with humility and humor, without self-pity, and I suspect her book will find many readers, especially girls and women (as well as the men who care for them) who to some degree will recognize themselves in the events described and in the insights and reflections.

Reading her memoir made me laugh cry and feel. So many things going through my head I can't describe the triumph I feel for her. The closeness I feel to her. I can't wait for another book. Tell me there will be more!!!

When readings Tina's book, the girl on the right, I felt like we were curled up on the floor in blankets and pillows and mesmerized by her storytelling. I could imagine my girlfriends all soaking up her words, her heartbreak, her emotional tales of a life of trauma. Tina's story, like so many others is often untold, the courage and bravery she shares for us readers to witness, is incredible. Victimhood is not something that disappears, or is washed away with time and this book shows a life that struggled but is healing. May this book continue to spread the message that healing happens, not from negative words of "to get on with it," "let it go," and "stop playing the victim" but from love.

I hope this book will support those who have been traumatized with an exquisite depth of understanding and presence of someone that has walked in these shoes. Tina's words give life and hope to those that have stayed hidden in the shadows, hopefully breaking the cycle of abuse, and addictions. The healing continues in my heart.......

Wow - this book was a very easy read and one was able to relate to and sympathize with the author. It is amazing one could go through so much in life and still look at things in a positive manner. I enjoyed the book very much, and it gave me hope that one can overcome what ever life throws at them!!