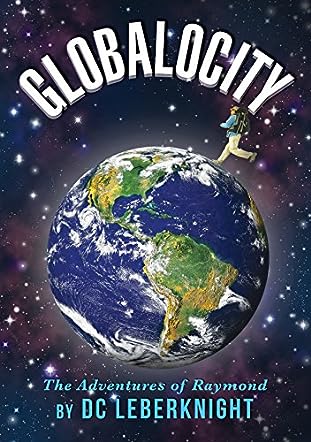 David once bicycled across Central America, then he moved to Tokyo. He taught computer science in Colorado, then he married Lili in Brazil, then they toured Africa by public bus. The happy couple eventually moved to New Zealand because it's a great place to live, but their adventures continue... Check out "David and Lili's World Tour" online, a travel blog. Global velocity!

Globalocity: The Adventures of Raymond by David Leberknight is an adventure story about world exploration with a funny and witty twist. Raymond wants to travel the world. He sets off on an extraordinary adventure to New York City and India. He might even stop in Brazil, if the mood strikes him. Along the way he meets incredible people and learns a lot about the world's culture, people's prejudices, and how they view Americans. The story is relaxed and told in a carefree manner, but there are a number of sub plots woven into the story that tackle deeper issues like religion, philosophy, and politics. The story even asks questions about life itself. So prepare for an epic adventure, and make sure to fasten your seat belt.

Globalocity is a fun, engaging read that I couldn't put down. Once I started, I had to finish it and know how Raymond's ride ended. Leberknight did an excellent job of creating memorable characters that rocked their world, even the new, strange and unique cultures that they were visiting. I also really enjoyed the sub plots within this story. So while most of the story was laid back and cool, the subplots gave it an added dimension, or a depth that the story really needed. It was a nice way of asking readers to think about what they were reading, instead of just giving us an entertaining story with no depth or merit.