Going Below the Water's Edge 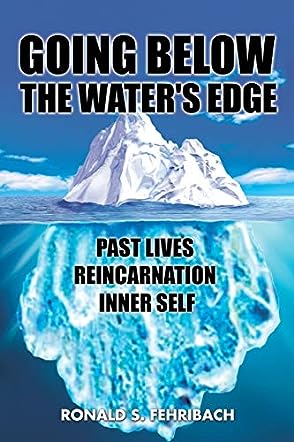 Ronald Fehribach spent his early years growing up in a small Indiana town surrounded by lakes, rivers, and a beautiful countryside. In high school he developed a liking for drafting and entered a technical institute after graduation. He wanted to be an architect, but the assassinations of the 1960s, racial strife, and the Vietnam War lead him to change his plans.

Redirecting to a political science degree, he enrolled at Indiana State University and graduated in 1974. At the university, he was able to get his military commission and work in financial and program analysis on a federal training program in Washington and Chicago.

Upon graduation he went into the military, where he served in Korea and on several military bases. Rising to the rank of captain with nuclear air defense and field artillery experience (1974–1979), he concluded his duty in the Indiana and Kentucky Army National Guard.

After the military he decided to explore the mind. He did his pre graduate work at Indiana University (1977) and completed his master’s in industrial and community service counseling psychology at Eastern Kentucky University (1980).

In 1991 (and continuing to this day) he created Mama’s Place—The Legend Continues, which is one of the last mom-and-pop rock shops in Phoenix, Arizona.

Going Below the Water’s Edge: Past Lives, Reincarnation, Inner Self by Ronald S. Fehribach is a riveting, autobiographical account of Ronald’s path towards self-discovery and his knowledge of reincarnation. This book combines elements of philosophy, the power of the conscious and unconscious mind, mysticism, hypnosis, psychology and more in a compelling account of one man’s journey into the realm of his past lives and what it all means to him. This book begins with a collection of excerpts related to reincarnation from well-known people as well as the religions of the world, including certain aspects of ancient Hindu and Buddhist beliefs of reincarnation. The book then moves on to describing Ronald’s experiences with reincarnation in first person through hypnosis with his counselor.

Ronald Fehribach writes in a direct, personal way that reaches the audience on a human level. Ronald’s writing is easy to read and understand and, in fact, at times he is able to convey complex theories in a simple, straightforward, heart-to-heart talk manner. I enjoyed reading this book tremendously because it offers a rare, first-person account of one man’s journey towards self-awareness through real question-and-answer sessions with his therapist. It is a must-read for anyone who is on such a journey themselves or for anyone interested in that most fundamental of questions: who am I? Ronald is an engaging writer and I am considering reading this book again as I believe this may be one of those books which, the more one reads it, the more one gets out of it. Overall, I highly recommend this book.

Going Below the Water’s Edge: Past Lives, Reincarnation, Inner Self by Ronald S. Fehribach is a book that gives readers ideas about the hows and whys of life, living and relationships. It speaks about the concept of reincarnation and how each religion looks upon it and interprets the moving on of the soul after the death of the body each time. It also brings up the curiosity angle of individuals who are eager to know more about their past lives and the impact it has on their present life. The topic covered in the book is highly interesting and it reiterates the fact that the soul is immortal.

The author's personal sessions with the doctor add weight to the concept of past life regression and it gives readers another perspective on the soul being immortal and the concept that only the body perishes. The author feels that the most explosive advancement in the future will be on the workings of the human mind. The author also speaks about the oscillation of light and dark and how the latter veils the senses till we move into light and envisage things with more clarity. Delving more into a past life through regression and hypnosis can be helpful and useful in understanding one's own self. Knowing about a past life can also be helpful in curing many psychosomatic diseases. Past Life Regression and Hypnosis are topics that are very exciting, mysterious and fascinating and they take readers into another realm altogether.

Going Below the Water’s Edge: Past Lives, Reincarnation, Inner Self by Ronald S. Fehribach is a memoir about the author’s experiences with regressive hypnosis. Most of the eleven chapters are the transcripts of recorded sessions with his doctor. Over a period of time, Fehribach explores the layers of his subconscious, floating from darkness into tunnels of light where the destination is clear vision. As his body sinks deeper into a restive state, his mind becomes engaged in a free fall through time and space. With the help of his doctor, he learns to control analyzing the visual images displayed on the passive recording device. In a deep trance, he follows his journey of vibrations of energy traveling to a place he knows. The past lives go way back, and then move forward to 1681, London. He encounters psychic guides such as a shepherd who hits him in the side, which materializes into physical pain once awakened. There is a hallway that is used to balance the energy and focus of the past and present. Afterwards, the doctor helps him interpret his thoughts.

According to Fehribach, the unconscious has greater dimensions than most people are aware of, like an iceberg where only the tip is visible. He summarizes his beliefs based on his personal experience, yet remains curious about life’s true meaning. At the end are excerpts from The Gospel According to Thomas. All in all, Going Below the Water’s Edge: Past Lives, Reincarnation, Inner Self by Ronald S. Fehribach is a gripping account of one man’s journey towards self-reflection and inner peace.

Going Below the Water’s Edge by Ronald S. Fehribach is a story of reincarnation and rebirth. It is the story of a man who knew he had more in his past than what he could easily remember and set about finding what exactly that was. With some help from Dr. Larmore, Ron is capable of exploring his mind and his past lives, going back more than just one lifetime, in fact several. He is able to examine the way that he lived and the important hopes and fears that enveloped him at different points during those lifetimes. It’s not just a journey through your history and past. It’s a journey through your likes and dislikes along the way.

This book definitely opened my eyes to some new ideas on reincarnation. I was never really sure about it before, but this book actually offers some very detailed information about the subject. You find out a lot more about how it affects someone and what it really means to have a past life. The individuals in this book were very interesting and made it easy to learn more about the subject of reincarnation and the way it will not only astound you but change your life forever. Ron Fehribach has definitely explored a controversial subject and turned it into an amazing experience and an amazing story for anyone who picks up Going Below the Water’s Edge: Past Lives, Reincarnation, Inner Self. When you finish this book, you’ll want to know even more about your own past lives and experiences as well.

Going Below the Water’s Edge: Past Lives, Reincarnation, Inner Self by Ronald S. Fehribach is a journey that takes you deep into your mind, deep into your unconscious and conscious to find what may be hidden. It is a journey that questions our very being, delves into the controversial subject of reincarnation and looks at what links we have to the past. Were we all someone else in a previous life? Did we bring with us any characteristics or personality traits from the person, or people, as the case may be, that we were in a past life? The journey takes you through religions that are firmly based in the concept of reincarnation, their leader’s links to the past. It takes you through hypnosis and meditation, regression back beyond birth to see if there was another world from which we came – the unseen world.

Going Below the Water’s Edge: Past Lives, Reincarnation, Inner Self by Ronald S. Fehribach was intriguing to say the least. It makes you start to question life, about how we came to be; if you don’t believe in reincarnation, you may start to rethink that by the time you have finished the book! I must say that I found the writing very clear and very direct. Ronald Fehribach writes as if he is talking to you one to one, he makes it personal to the reader. I found it incredibly easy to understand and a very interesting subject. It is an account of one man’s perspective, his journey through therapy to find himself and is a definite must-read book for anyone who is on a similar journey of discovery.

What if there was a part of your mind that you were not in touch with? If so, what do you think you would find in that part of your life, given a chance to explore it? In his book titled Going Below The Water's Edge (Past Lives, Reincarnation, Inner self), Ronald Fehribach narrates his journey to understanding his unconscious/psychic side. Have you ever considered that maybe your soul existed before you in another form or another person, or maybe that you might be carrying around energy that comes from several lifetimes before you existed? This is what Ronald Fehribach set out to understand by getting in touch with his psychic side. Through deep hypnosis, he answers this question by visiting his unconscious to see whether reincarnation actually takes place or if what has been thought to be reincarnation might be just the working of our unconscious.

Going Below The Water's Edge (Past Lives, Reincarnation, Inner self) by Ronald Fehribach answered many questions, but what I found more compelling throughout the book was the answer to the question: What would happen if you were allowed to travel beyond the limitation imposed by your physical being? This is the main question that the book answered for me. As I followed him on his journey outside his body, it was very intriguing to read about how his unconscious took him through different time periods and across the globe to places and times his conscious side did not know existed. Going Below The Water's Edge is a very enlightening book and anyone interested in subjects concerning reincarnation, awareness, energy, understanding your inner self and how to get in touch with your unconscious through hypnosis would find it a very worthy read.