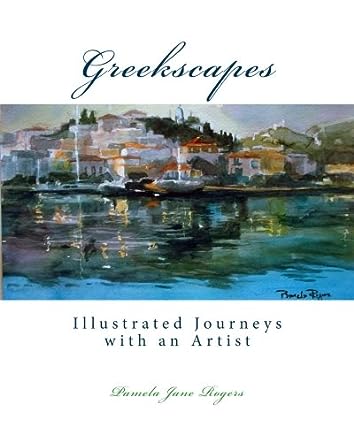 Greekscapes: Illustrated Journeys With an Artist is a nonfiction travel memoir written by Pamela Jane Rogers. Pamela was always an artist. Her mother enjoyed telling the story about how her infant daughter had created her first work of art drawing with her mother’s lipstick on the wall. Pamela had her own doubts about the veracity of that story, but she recognized the deeper truth in it. While continuing her artistic growth following the art lessons her parents had sent her to as she was growing up, Pamela also became interest in Design which she studied in college. She then married the lifeguard who had captured her imagination, if not her heart, and she strove to be the perfect Southern wife and hostess. Motherhood was something else she aspired to, but all the efforts and medical interventions were never able to help her fulfill that dream, that particular and devoutly hoped for destiny. Pamela’s life changed radically when her art drew the attention of Jacqueline Jenkins, who became her mentor and friend. When their planned trip to Provence, France, was put off in favor of a trip to the Greek islands, Pamela was deeply disappointed at first, but something about Greece drew her in. She had found her home.

Pamela Jane Rogers’ nonfiction travel memoir, Greekscapes: Illustrated Journeys With an Artist, is an inspirational and engaging story about art, Greece, and the woman who left her North Carolina roots and established newer, stronger ones in a land thousands of miles away. I was initially intrigued by this book for two reasons: while not the artist Rogers is by any stretch of the imagination, I love sketching, working with watercolors and learning to work with oils; and, like Rogers, I’m fascinated with Greece and the incredible history, culture and environment that country offers. I was not disappointed on either account. I love Rogers’ work, particularly how she uses light in her images of Greece. Her pictures seem to beckon the viewer to walk along those winding, hilly roads and peer into windows framed with flowers. Her seas beckon, warm, salty and filled with the promise of a grand swimming adventure. Her autobiographical material is marvelous, showing her growth into a fearless, bold and whole being, complete in herself, even while she delights in the close and caring companions who become a second family in her new homeland. This well-written and compelling memoir will have readers pondering a vacation by the Aegean Sea, as well as gaining a newly found respect for those hardy artists who brave wind, sun and the elements as they create their works of art en plein air, something that’s an imperative; that’s what they do. Rogers sets these things out quite clearly and unforgettably in her travel memoir. Greekscapes is most highly recommended.