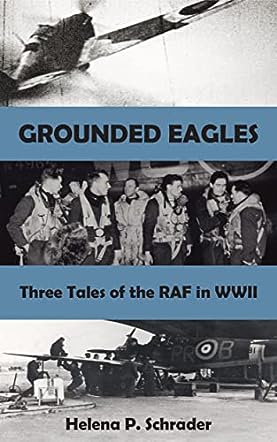 Helena P. Schrader is an established aviation author and expert on the Second World War. She earned a PhD in History (cum Laude) from the University of Hamburg with a ground-breaking dissertation on a leading member of the German Resistance to Hitler. Her non-fiction publications include "Sisters in Arms: The Women who Flew in WWII," "The Blockade Breakers: The Berlin Airlift," and "Codename Valkyrie: General Friederich Olbricht and the Plot against Hitler." In addition, Helena has published nineteen historical novels and won numerous literary awards. Her novel on the Battle of Britain, "Where Eagles Never Flew," won the Hemingway Award for 20th Century Wartime Fiction and a Maincrest Media Award for Historical Fiction. RAF Battle of Britain ace Wing Commander Bob Doe called it "the best book" he had ever seen about the battle. He went on to say: "Refreshingly, it got it smack-on the way it was for us fighter pilots."

Grounded Eagles is a trilogy of stories revolving around the human side of the world of military aviation in Britain’s WWII. Helena P. Schrader delivers complex plots through the eyes of characters you will wrap your arms around and cheer for to the very end. A Stranger in the Mirror, A Rose in November, and Lack of Moral Fibre follow three different men through three different challenges, all revolving around the deadly dangers of war and aerial battle, and how the mind deals with it all. Grounded Eagles is a blanket name encompassing a picnic of three delicious courses. Helena P. Schrader takes us on this outing, providing a blend of ingredients – plot and characters - that complement without competing to produce a sumptuous reading experience of extraordinary satisfaction, like a great chef. The stories take us into the world of WWII British aviators and aviation in the 1940s from three different viewpoints that never leave the main theme but delight us when their ingredients blend and enhance each other. Through all the tales, Helena P. Schrader deals with the psychological dramas faced by her characters as they repeatedly botch relationships, reflect, and reengage in her brilliant treatment of the most unsettling circumstances.

Beginning with A Stranger in the Mirror and twenty-two-year-old David Goldman in the cockpit of his blazing, mortally wounded Spitfire and his crash landing with his hands burned away and his face destroyed beyond recognition, we are taken on a journey, through his eyes, of a phoenix-like reemergence of life with new, exciting possibilities. Then in A Rose in November we meet Rhys Jenkins, a hard-working mechanic who achieves his dream of being appointed as Ground Chief of a Spitfire Squadron, the very aircraft that nearly killed Goldman, and working for the same leader that guided the young pilot. But Jenkins faces different challenges in life, struggling with family, his emotions, class differences with a woman, and the internal challenges life brings. Finally, Lack of Moral Fibre thrusts us into the search for reasons that Flight Engineer Kit Moran, already a survivor of thirty-six missions, refuses to fly on his thirty-seventh. Is he a coward, or is he facing the limits of his ability to psychologically survive?

You will be drawn quickly, deeply, and for the duration into these masterfully written stories of the true depth of human ability to deal with, adapt to, and overcome the worst that life can offer in times of war. But these are not war stories. These are human stories of the finest qualities to be found among warriors. Helena P. Schrader is a true master at delving into these complex psychological dilemmas and emerging with tantalizing, completely comprehensible tales of human frailty and strengths that blend into a delicious experience for her readers.

Grounded Eagles is set in the dark days of the Royal Air Force during World War II. It is a trilogy that follows the course of the conflict through the tribulations of three quite different men. The first of these was pilot “Banks” Goldman, horribly burned and disfigured when his fighter plane was shot down. The road to recovery, both physical and mental, was arduous. Plastic surgery was in its infancy, but with the help of doctors and friends, he recovers. The second character is Flight Sergeant Rhys Jenkins, a widowed father of two children who is an aircraft fitter. He is promoted to a new Squadron and finds a new love, only to be faced with the social hurdle of the class barrier. The final player is “Kit” Moran, a Flight Engineer on bombers who must confront the burnout we now acknowledge as Post Traumatic Stress Disorder. The challenges that these men face are dealt with by author Helena P Schrader in a manner that is realistic, insightful, and compassionate.

Grounded Eagles is both well researched and very well written. While the main characters are fictional, acclaimed historian and author Helena P Schrader draws on real-life experiences and portrays aerial warfare and its horrors in graphic detail. She explores the comradeship, bravery, and unsung devotion to duty of airmen and ground crew, as well as their human frailties and emotional vulnerability. Issues such as strategic bombing and civilian costs are raised, while relationships between parents, loved ones, and combatants are explored. Warfare is a great social leveler and the RAF provided an early example of how merit could partly override social class – an issue often overlooked by historians. This book comes at a time when memories of World War II are fading and is thus a celebration of what good can come from a desperate situation, as well as being a timely reminder of the human cost of warfare. It is an excellent publication! This is one of the best books about the RAF in WWII that I have ever read.

Grounded Eagles: Three Tales of the RAF in WWII by Helena P. Schrader is a collection of three short stories or novellas that take a look at WWII pilots and ground personnel who for one reason or another find themselves facing difficult circumstances. In the first story, A Stranger in the Mirror, we meet David Goldman, a pilot whose engine had caught fire after an aerial attack. The fire almost consumed him as well as his plane. However, with third-degree burns to much of his body and his face totally destroyed by the blaze, David faces months of surgeries in the relatively new field of plastic surgery before he is able to face the world again. Having effectively run away from his wealthy family in Canada to join the RAF, he now must reconstruct his life and discover who he really is. A Rose in November introduces the reader to chief aircraft mechanic Rhys Jenkins whose dream of leading men in the maintenance of a Spitfire squadron’s planes has finally come to fruition. A widower from a humble background with two children to bring up, Rhys is well aware of his social status in life. When he falls in love with a woman clearly outside his own social standing, he wonders if there truly is a possibility of finding love at his time of life, even if she is well “out of his league”. Finally, Lack of Moral Fibre was a term the RAF used for air-crew who suddenly decided they couldn’t take the horrors of the flak, the enemy fighters, and the sheer terror of wartime flying anymore and refused flying duty. Flight Engineer Kit Moran, after being awarded a medal for valor and having completed one full tour of duty and well into his second tour, suddenly refuses to fly on the eve of his 37th Op. He is shipped off to the DYDN Centre where a psychiatrist will determine his fate. Is Kit mentally ill or should he be disciplined for cowardice? The unraveling of Kit’s story will provide the answers.

Grounded Eagles is a truly outstanding collection of three stories that pull at the reader’s heartstrings for totally different reasons. Author Helena P. Schrader has put together an unusual collection in that they focus on the RAF and the war from a different perspective than most. It is hard to single out one of the three as my favorite but I feel the angst and pain of a man who has lost his face in A Stranger in the Mirror, which was perhaps the most moving of the three tales. Through the pages, one could relive the pain and the anguish of David Goldman as he sought to find himself and accept that there could be life after these horrific injuries, despite the newness of the technique. The story also highlighted the groundbreaking work being done by the plastic surgeons of the time, led by the illustrious Dr. McIndoe. What impressed me also was the camaraderie and support David received, not only from those in his squadron especially, but by people in general. In A Rose in November, the author tackles the class divide head-on and I did enjoy the story of this reach across the social divide. The story and the characters are quintessentially British and that’s what gives it so much charm and appeal. Lack of Moral Fibre was a stunning revelation, to say the least. I found it unbelievable that men with such clearly demonstrated courage could suddenly be accused of lacking moral fiber and often drummed out of the service. The story makes one consider just how much pain, death, and suffering one human being has to be subjected to before he or she inevitably cracks. All three stories are beautifully compiled and written and although I’m not a great reader of novellas, I wouldn’t hesitate to highly recommend this read and indeed anything else from the portfolio of this clearly talented author.