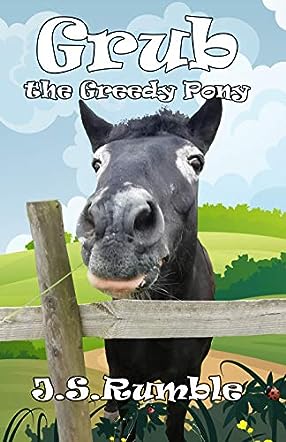 Once you start rhyming, it’s pretty hard to stop: “I never thought rhyming words was something I could do,/ then one popped in my head, followed by another two./ Have a go, do it now, rhyme your every word,/ and sometimes what you get, is really quite absurd.” And that’s what happened with J.S. Rumble, who began writing a nifty ditty about a greedy pony and ended up writing about all kinds of animals and even a spider, too, and tossed in a couple of spooky adventures for Halloween. The little rhyming ditties might seem random and silly, but that’s the whole point, isn’t it? To have a little fun with words, rhyming verse, and life itself.

J.S. Rumble’s collection of poems, Grub the Greedy Pony, is a fun collection of poems aimed to entertain and please his mother. The collection begins and ends, with a few short ditties in the middle, with a funny rhyming verse about Grub. He really is a silly pony, a greedy one, too. “So strong is little Grub, and so determined he is to eat. He’ll pull you down the yard and yank you off your feet.” And there’s even a ditty about one of Grub’s friends, called Squiggle: “I have a little brown pony, Squiggle is her name,/ and although I love her dearly, I think she’s quite insane.” If you read through these rhyming poems, from beginning to end and in any order in between, you’ll probably end up following the addictive trend of rhyming your words. It is a contagious trait. I loved the illustrations, even though the author felt obliged to apologize for them (and the apology was written in rhyming verse). This is definitely a fun read, a real pick-me-up when that’s what we all need the most.