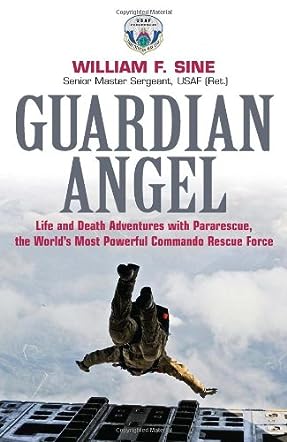 Guardian Angel is William F. Sine’s memoir of his service as a U.S. Air Force Pararescue Jumper, or PJ, as they are familiarly called. The rigors of training required of a PJ is not for everybody, as Sine explains in his introduction, but very few of those who are willing to try for a spot in this elite force actually make the grade. Those who do, become stronger, faster, and more resilient than they ever dreamed they would become. They also must complete the medical training required for all PJs. The PJ motto is “These things we do that others may live.” The things they do are the stuff of heroism, not least of which is parachuting into armed conflicts to rescue and treat wounded soldiers, children, anyone who calls for help. PJs are involved in rescues at sea, in the desert, and on ice. Their training is a lifelong schooling in new skills designed to help them survive the dangers of their service. Sine’s descriptions of his PJ compatriots reveal a group of incredibly dedicated men, who will go over-the-top in training, performance, and also fun. They’re the consummate daredevils who seek non-stop excitement and are not above silly pranks and stunts. Reading Guardian Angel will make a number of readers wonder if they’d make the grade and get to have the adventures that Sine writes about, and that, indeed, is Sine’s avowed motivation in writing this book.

Guardian Angel is a fabulous read, filled with heroism, history, and hi-jinks, as author William F. Sine recounts his life as an Air Force Pararescue Jumper. Sine was there in one of the Kobar Buildings when it was bombed and gives a harrowing, first-hand account of the event. There are also pictures of the building that will make any reader shake their head in disbelief that anyone could survive such an encounter. Reading this book will give you a history of an elite group of servicemen that few have ever heard of, unless you’re involved with the Armed Forces yourself, in which case, you would have been quite pleased to hear a PJ was coming to help you out in an emergency situation. Sine’s writing style is fluent and dynamic, helping the reader visualize the foreign places where he served and empathize with the PJs as they handle yet another daring rescue. It’s good to know these men are out there doing what they do, and I’m very glad that William Sine was there to let the rest of us in on the details. I highly recommend this book.