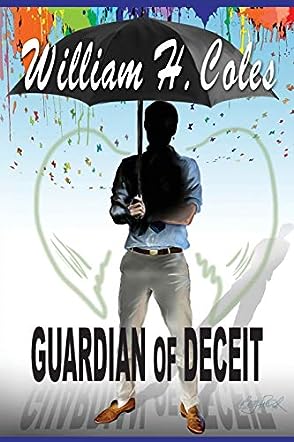 Guardian of Deceit by William H. Coles is the story of Darwin Hasting, a 17-year-old who had no idea how his life was going to change. There was a time when Darwin’s biggest worry was becoming a med student. However, that all changed when his dying aunt sent him away to New York to live with his cousin Luther. Luther was a famous footballer and arrogant. Suddenly, Darwin was learning what it was living like he was invisible, had no worth, and had to fight tooth and nail to avoid the excessive lifestyle of his cousin while also fighting for his right. Could he get what he wanted?

This audiobook was something special because of all the extra effort of the author. The author William H. Coles did a great job narrating the story and capturing the essence of each of his characters. He changed the cadence of his voice when he narrated different characters, and that took the audiobook to a whole new level for me. He added just enough stress when situations were a little rough, made his voice low when Darwin was sad, and added excitement when Darwin was feeling confident.

The author kept the pace steady, allowed readers to catch their breath, and then took them on a roller coaster ride unlike any other. Each character was fully-developed and demanded the attention of readers. Luther had my heart from the beginning, even though he was far too arrogant for my liking, to be honest. But he was developed so craftily that I could not help but like him. Of course, Darwin’s arc was complete as well. It was his coming of age story and he bloomed as the plot reached its conclusion. I loved this audiobook!

Guardian of Deceit by William H. Coles is the story of Darwin Hastings, a seventeen-year-old orphan who has been under the care of his aunt. Now his aunt is very sick and can’t take care of him any longer. Darwin flies to New York from Pittsburgh to live with his cousin, Luther Pinnelli, a football star. His only dream is to study medicine after graduating from a private school. But the way his cousin treats him changes everything. Settling him in a storage room in his vast estate is just the beginning of Darwin’s woes. He doesn’t have the basic necessities and is denied access to his inheritance. But his good nature and intelligence win him friends in the house, including Laszlo Forgash, the head of security, Mrs. Thomas who runs the house, Luther’s girlfriend, and others. But can he navigate the complex environment filled with untrustworthy characters and lust and pursue his dream in the medical field?

This is a character-driven story with an ingenious plot and well-handled conflict. As one listens to the story, one begins to understand the complexity of the relationships in the story. From the onset, I felt that Darwin doesn’t belong to Luther’s world. It is a world of celebrities and is filled with gambling and shady behavior. I particularly enjoyed the way the author writes the relationships between the protagonist and the people around him, starting with Dr. Adrian Malverne in the plane and then people like Mrs. Thomas and Luther’s girlfriend. This story is well-narrated by the author himself. His voice is unique and I enjoyed the pace he maintains in the narrative, allowing points of view to come out clearly and changing the tone in dialogues to reflect the POV of the characters. It is a story that explores complex relationships and builds a conflict that reflects on the contrasting views that Darwin and Luther have about life. The audio narrative in Guardian of Deceit is well-done, professional, and clear.

Guardian of Deceit by William H. Coles follows a young boy’s story as he moves away from the care of his aunt to live with his cousin. Darwin Hastings has always dreamed of pursuing an education in the medical field after graduating from a private school. But living with his cousin, Luther Pinnelli, a football star, is an experience that is far from anything he had imagined. And instead of experiencing love, he feels rejected, occupying a storage room on a huge estate and being denied basic essentials. He can’t even have access to the inheritance left to him by his parents. His cousin’s luxurious life, gambling, and philandering are things foreign to young Darwin. He creates new friendships on the estate and connects meaningfully with others. Can he achieve his dream of becoming a doctor like his father?

This is the story of a young man struggling to find a footing and create a space for himself in a world that is sophisticated and where morals don’t rhyme with his core values. Darwin is an interesting protagonist and I loved his intelligence, his deep sense of humanity, and his ability to build friendships, even with people like Sweeney Pale, Luther’s girlfriend, Dr. Adrian, and Granny. The author explores the relationships between the characters with unique skill and allows these relationships to test and nurture the personality of the protagonist. The writing is descriptive and punctuated by good dialogues.

This audiobook is read by the author himself and has something intimate about it. William H. Coles does an impeccable job with the reading, allowing his somewhat husky voice to bring life to the story. I didn’t find it hard following the characters as I listened to the story. Guardian of Deceit is well-plotted and character-driven, a story that explores themes of loss, love, humanity, personal growth, and family.

Guardian of Deceit by William H. Coles follows Darwin Hastings, an intelligent seventeen-year-old with dreams of a career in medicine to be like his dead father. His aunt is sick and dying and can no longer look after him, so she sends him to New York to live with his cousin, Luther, a football star and a very rich man. The young man flies from Pittsburg to New York, but he quickly finds himself entangled in a lifestyle he never bargained for. Luther is not the kind of man who will let Darwin have his way and Darwin has to work hard to earn everything he needs. He doesn’t even have access to the trust fund left to him by his parents. He works hard to get into med school, but the bad influences from Luther’s estate follow him — drugs, secrets, and lust. Can he find a good footing and emulate the example of his father?

This is the work of a great storyteller and the author does a wonderful job in vividly creating the contrast between the life of an ordinary young man and the vices that come with having too much wealth. The characters are sophisticated and well-developed and I enjoyed the way the protagonist evolves through the story, even if it is frustrating to watch him blunder at times. His actions and aspirations are right for his age and this augments the realism in the story. The relationships between the characters are well-written and the drama is strong with dialogues that feel natural and real. Great prose — even through the audio, the reader can feel that it is a well-written, balanced, and entertaining story. Guardian of Deceit is narrated by William H. Coles and, as the author, he brings to life his characters, observing the punctuation and acting the part of each character brilliantly. It is professionally recorded and there is no distracting background noise. It felt like I was sitting with the author while he told the story of one of his best characters.

Guardian of Deceit by William H. Coles fits perfectly in the categories of coming-of-age and adventure, a story that follows Darwin, who leaves his dying aunt to live with his cousin, a famous football star. Moving from Pittsburgh to New York is a journey that fills the seventeen-year-old boy with excitement, but he quickly learns that his rich cousin, Luther, will prevent his access to the inheritance left him by his parents. He’d grown up with the dream of following a profession in the medical field like his parents but the dynamics of life in Luther’s expensive estate are a huge challenge as he is surrounded by people who are dishonest, lustful, and addictive. In this environment, can he succeed in living up to the image of his father and achieving his dream?

This novel is filled with colorful characters and right from the start, the young protagonist starts developing relationships with people. The author writes interesting details into the lives of the characters and allows the relationships they have with each other to come across in the writing beautifully. They are real and complex. Each character has a world for readers to explore. The author deals deftly with the internal conflict, especially when it comes to the protagonist. From the strong themes of family and personal development to the ingenious plotting, Guardian of Deceit is a great success. I adored the author’s storytelling skills, which are exquisite. The audiobook left me a little breathless to hear his voice, unfettered and real. It is clear and professional, and the entire story comes out nicely.