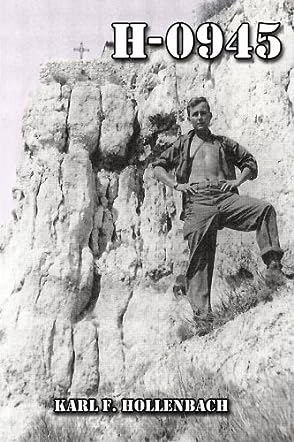 Karl F. Hollenbach was born in 1925 in Louisville, Kentucky. He received his B.A. and M. Ed. from the University of Louisville. His esoteric and metaphysical articles have been published in Japan and England as well as the United States. He and his artist wife live on Dunsinane Hill Farm near Fort Knox, Kentucky.

H-0945: A Common Soldier's Story of WWII is a memoir written by Karl F. Hollenbach. Hollenbach registered for the draft in 1943. He was accepted in the Army Special Training Program, which would allow him to attend college after completing his basic training. When he was halfway through the basic training, however, the program was discontinued, and he was ordered to re-start basic training. Hollenbach was trained as a machinist and assigned to an Engineer Maintenance Company. He served for over two years in various locations in Europe, including France, Switzerland, Austria and Germany. This memoir takes you through the author's experiences from his first trip to the induction center to the end of his second tour as an Army Reservist. All told, he served his country for 10 years.

Karl F. Hollenbach's memoir, H-0945: A Common Soldier's Story of WWII, kept my eyes glued to the pages as I followed his service during World War II. His story is both compelling and fascinating. Hollenbach writes smoothly and fluently, and the included photographs, letters and documents make his story come even more alive. H-0945: A Common Soldier's Story of WWII is also a true-life coming of age story as the reader shares in the 18-year-old recruit's journey into manhood. There are some stunning stories in here, especially that of the train accident that claimed so many soldiers' lives, and marvelous accounts of the historic buildings and places Hollenbach's service took him to. I had a grand time reading Hollenbach's memoir and am planning on reading some of his other works. H-0945: A Common Soldier's Story of WWII is most highly recommended.

H-0945: A Common Soldier’s Story of WWII by Karl F. Hollenbach is a non-fiction memoir about the author’s experiences in the United States Army at the close of World War II. Drafted into the military in 1943, Hollenbach attended basic training before being shipped over to Germany. The memoir chronicles his journeys through Germany and France to the end of the war and the subsequent occupation of Germany and France by the Allied forces. It also touches briefly on his life after World War II.

Mr. Hollenbach presents a unique view of life in Europe after World War II. Contrary to many memoirs of the time, it was interesting to read about Hollenbach’s time going to school while in the army in France. I found it fascinating that the army set up courses for the enlisted men, giving them the opportunity to study while serving their country. Throughout the book are photographs and documents obtained during Hollenbach’s time in the military. It was nice to put a visual to the narrative. I wish one of the letters had been typed up though as it was very difficult to read the handwriting. One of the more curious elements to me was the lack of milk provided to soldiers. I wish the author had explained why this was so. I also felt the second half of the book lacked some editing and could use a second look. Overall, though, H-0945: A Common Soldier’s Story of WWII was a different type of memoir and an informative read

World War II was drawing to a close when Karl F. Hollenbach received his notice to appear and was inducted into the army in 1943 as part of the Army Special Training Program. The A.S.T.P. was a program for soldiers to complete basic training, then attend a university where the program was available. Maybe Karl’s war wouldn’t be so bad after all. However, everything changed for Karl during his basic training; the A.S.T.P. was cancelled and he was reassigned to the 106th Infantry Division. Soon after, he was reassigned again to the 1471st Engineer Maintenance Company, narrowly missing deployment with the 106th which would receive heavy losses during the Battle of the Bulge.

Karl’s military career almost ended early when, on 17 January in 1945, he survived a horrendous train wreck in Saint Valery En Caux, France, where 120 U.S. soldiers died and 200 more were injured. Somehow spared, Karl spent the next year serving in parts of France and Germany where he was able to visit many historical areas. After his honorable discharge in 1946, Karl joined the inactive Reserves where he spent several years with a unit in the Engineer Aviation Battalion and was formally discharged with the rank of tech-sergeant in 1953.

Many stories have been written of one of the worst conflicts in American history, usually from the point of view of the combat soldier. In this story, Hollenbach describes World War II from the eyes of a young enlisted man in a service organization. I found the story to be an interesting look at a dark time in American history. However, some of the chapters seemed a bit disjointed, but overall, an easy to read and fascinating story.