From My Heart to Yours 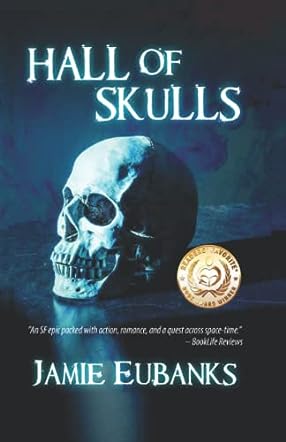 Jamie Eubanks, a native of Southern California, is the author of the critically acclaimed paranormal suspense thriller HIDDEN DOORS, SECRET ROOMS, and her new release HALL OF SKULLS, a sci-fi fantasy.

Hall of Skulls by Jamie Eubanks is a story that gripped me from the first page and had me turning the pages nonstop, the kind of science fiction that transports the reader into exciting and rich worlds, and, of course, in the company of characters that readers care about. In this case, it is Kai, whose mission is not only to overcome a series of well-calculated, heart-breaking, and insuperable challenges but also to locate his abducted lover and betrothed. To find Asher, he has to walk a difficult and traitorous road and cross paths with the aliens that almost conquered his world thousands of years ago. The Hall of Skulls holds immense power and astonishing secrets, and if only he can unlock its power, perhaps he might find Asher and prove himself a worthy leader of the Mokuteki. But how much fight can he muster for the task ahead?

Jamie Eubanks just blew me away with her novel. The protagonist is a man whose world is changed by the shocking discoveries he makes when he assumes responsibility for his people. While he goes through untold suffering and challenges, he also grows into a great character, each step he takes unveiling a mystery about the world he thought he knew. His encounter with powerful forces catapults him into chaos, allowing him to be transformed through the crucible of pain. The writing is gorgeous, with descriptions that left my mind with powerful images. The plot is cleverly written, the characters exceptional, and the entire writing as atmospheric as anything I would have wanted. I finished the book fast because I just couldn’t wait. Hall of Skulls is one of those books that grab all your attention and keep it until the unexpected end.

Hall of Skulls by Jamie Eubanks is well-written science fiction with a great setting in an imaginary world. It follows Kai, a temporary leader of Mokuteki, someone who never wanted power, but who unwittingly finds himself at the helm of his people. To prove himself worthy of this role, he must undergo painful tests and challenges. While he has thought of every conceivable challenge to be thrown at him, the last thing he expected was the abduction of Asher, his fiancée. Now he must find her, a mission that takes him through a tortuous and treacherous path, ushering in an encounter with the alien invaders, the Thrakens, and other deadly enemies. Can he unlock the secrets of the Hall of Skulls and harness the power to bring back the one he loves.

The strength of Jamie Eubanks’s novel lies in clever plotting and the skillful handling of character. The reader is introduced to a protagonist that is rock-solid and richly developed, a man whose life is changed in many aspects and whose desire to reconnect with the love of his life drives him to face impossible odds. The setting is exquisite, a world with lots of problems, mostly unpredictable. The author writes in excellent prose, filling the pages with vivid descriptions. I particularly loved the way Eubanks writes about the emotions of the protagonist, his thoughts, his humanity, and his struggles. The descriptions of the Hall of Skulls are spot on and a pervading sense of mystery lingers throughout the story, from scene to scene. Hall of Skulls will take any reader on an exciting adventure.

Hall of Skulls by Jamie Eubanks is science fiction with a strong appeal to fans of epic fantasy. The story follows Kai, who is supposed to be the temporary leader of the Mokuteki people. He is a man without any huge ambitions. But to prove that he is the right fit for the leadership of his people, he is subjected to cruel and insuperable tests. While he is blindfolded, his fiancée Asher is abducted. And this alone changes everything. Asher is the woman he can’t live without, so he sets out in search of her, following a path that is brutal and tortuous, a path that will put him in the crosshairs of the aliens who almost conquered his people thousands of years ago. As he continues his search, he finally understands that his ultimate success will depend on unlocking the secret power of the ancient technology of The Hall of Skulls.

This is a wonderful tale in which a protagonist who must forge a path for the future of his people must tap into an ancient technology to face the challenges of the present. Jamie Eubanks has written a rip-roaring story that will have readers mesmerized as she leads them, step by step, down a path of suspense and intrigue. She creates a character that will stay in the minds of readers in Kai — a character with a strong and unwavering motivation. He is driven by the need to locate the love of his life, but as he undertakes that mission, many other things happen, taking him on a dangerous path to the Hall of Skulls. The plot is tight and twisty, the writing excellent, and the setting an enchanted land that is never lacking in monsters. This one is a spellbinder.