When Love Sticks Around 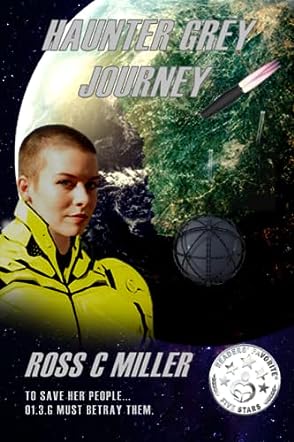 Haunter Grey - Journey: Haunter Grey Book 2, by Ross C Miller, is a compelling, immersive science fiction novel that will leave you wanting more, and thank goodness Book 3 is something to look forward to. Betrayal cuts deep on both sides, but this is what 01.3.G has to do in order to preserve the people she cares about. Gianna, once a Unity Lord, knows the Unity fleet will be challenged trying to survive on the prison planet known as Regia, and it's on Gianna's shoulders to save her people from annihilation. It was once thought that Unity could never be destroyed, but now things are chillingly different. How can one person make an impact--persuade the Resistance--and turn things around?

If you enjoyed Origin, then you will become invested in the continuing story of Castor and crew. And if you're new to the series, then don't worry, since the author adds information to the narrative that makes it easy to catch up. The contrasting goals of the leaders in this novel make for a nail-biting read. Castor makes it clear that no one is to be killed in this age-old war unless absolutely necessary. But the Unity is the polar opposite and kills as seen fit. Miller again brings fans a cast of characters that are well-realized, unique, and so interesting to get to know. For example, Rabid is a split-personality schizophrenic in a constant battle with himself--one side is a deadly killer who is trying to choke Lessa to death in the prologue. I really like the interactions between Castor and Lessa. The backstories of the characters help solidify the reader's relationship with them.

This author knows how to balance narrative with dialogue while keeping the action at a heart-pounding pace, and he's good with inner dialogue. For a novel on the longer side, it goes by quickly, and you're ready for part 3. The inner struggles of the characters, especially Gianna, make you feel for them, and it's easy to get caught up in the life-or-death struggles. I enjoy Miller's confident, competent style. You know he has everything under control and knows how to deliver an entertaining story full of action, pathos, and universal themes. Fans of classic science fiction like Star Trek will fall in love with Haunter Grey - Journey: Haunter Grey Book 2 by Ross C Miller.