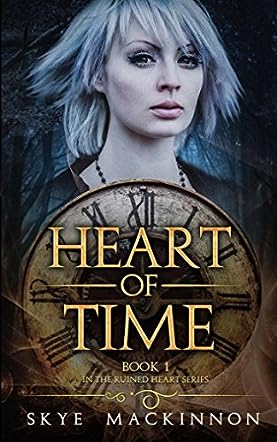 Skye MacKinnon is a bestselling author who tells stories about science for a living - but at night she writes fiction, mainly paranormal fantasy and reverse harem. When she's not writing, she's out and about with her camera, or spends time with mythical creatures and the odd vampire living in her kindle. Usually, there's tea and cake involved.

She lives in Scotland with her two overly spoilt house rabbits and a few hundred self-obsessed characters constantly asking her to tell their stories. One day she will. Promise.

Heart of Time by Skye MacKinnon is the first book in the Ruined Heart series. Eona has always stood out with her naturally white hair and her ability to manipulate time, but she's found comfort in her life with the traveling family that found her when she was a child. When she's arrested for the use of magic, she's imprisoned in a dungeon until seemingly being rescued by a sorcerer that claims to only want to teach her how to use her magic better. While Eona learns ways to tap into powers she never knew she had, she finds herself trusting the sorcerer for reasons she doesn't even know. As Eona develops a bond with a mystical and mysterious creature, she discovers a darkness in her sanctuary that threatens to destroy her. A connection with a beautiful Elven woman could give Eona the strength to escape and reclaim her power as her own.

The plot opens with a gritty fairytale that tells the story of a girl that lost her heart to save her mother, only to lose the ability to love, which leads to her eventually killing her husband when he defends their daughter. This turns out to be Eona's own beginning which takes an even grittier turn as she's taken from the family that loves her and thrown into the treachery and darkness under the king. Heart of Time is set up as a reverse harem love story, but only sets up traces of a greater and more complex love story to happen. The plot feels like the beginning to a larger story and puts all the pieces into place for something bigger.

This is a dark world with Eona finding herself in the middle of it all, but she finds a light in that world through a little mythical creature that is born and forms a connection with her. Eona also forms a friendship with a healer, bonding over their shared love of herbs and plants. They have an honest and sweet relationship, but it takes a back seat to more pressing and chaotic events that occur. What is seen of him suggests he's being kept there under the sorcerer in a similar way that she is. A fantasy adventure soars in Heart of Time as Skye MacKinnon brings to life a story with a strong heroine, a sinister darkness lurking, a powerful mythical being, a magical connection to nature, and the beginnings of a love story that leaves you wanting more.