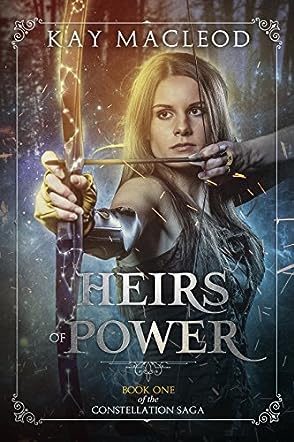 Heirs of Power by Kay MacLeod is the first book in The Constellation Saga. Kitty Fairlow has everything she could want: hunting, protecting those she cares about, the peace of the woods she's always known, and an upcoming wedding to her childhood love. After Kitty and her father discover an ancient ritual, her father reveals the startling truth of their origins. She's one of the ten Constellations, The Archer, a power she inherited from her father. After a lifetime of being hidden, Kitty is drawn into an ancient battle, following a dangerous calling to save the world from the Tenebri, an ancient race escaping into her world. Fighting alongside the proper Dancer and the abrasive Juggler, they're in a race against time to find the other Constellations to prevent the destruction of their world at the hands of the Tenebri.

Nothing is as it seems. In a search for Constellations, twists await around every turn and surprises will keep you turning the pages. Heirs of Power is a humorous and dangerous adventure to save the world; a unique spin on magic and the Constellations with teamwork at the heart of the story. Kitty is thrown into this shocking new reality embodying the Constellation of the Archer, and has to learn as she goes. Her journey has humor along the way as she's stuck between two people who can't stand each other. One of the relationships that shines throughout is the friendship that develops between her and Juggler Asher. He's abrasive, snarky, often blunt and rude, while she's more subdued, calm, and always vocal about caring for others. What makes this friendship so special is how Kitty digs deeper and sees that underneath all that is someone caring and loyal. They come to rely on each other and she learns some deeper secrets about him and the Constellations' history. Kitty's primary skills lie in hunting and archery, but she also has a gift for seeing into the hearts of people. This makes her a reliable and empathetic heroine.

Kay MacLeod brings these characters to life, layered and flawed, taking ordinary people and turning them into heroes with extraordinary gifts. These are normal people who make mistakes, have flaws, and aren't entirely prepared for the weight of the world, but the journey is one of self-discovery and coming of age. Heirs of Power is a fantastic start to the series, a must-read with danger and tragedy, emotion and heart, and with characters that you'll fall in love with.