Monsoon in the Making The Best Thing About Bennett The Old House By The Woods 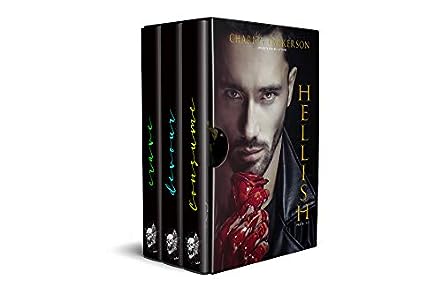 Charity Parkerson is an award winning and multi-published author with several companies. Born with no filter from her brain to her mouth, she decided to take this odd quirk and insert it in her characters.

Connect with her online:

Hellish (Parts 1-3) by Charity Parkerson is a paranormal romance that features phenomenal characters. It begins with Jonathan’s visit to Tortola, a visit that could have been one of the best vacations, given the beauty of the place, but it isn’t. He is visiting as the investigative reporter for Global Daily and as someone who has broken more stories than anyone else. Twelve college-age girls have mysteriously disappeared and he must investigate. The meeting happens in a bar called Consume and the person he meets is very hot, even his name: Cinaed. The attraction between the two men is so strong that the romance sparks off quickly. It is here that he unveils the truth about a pack of demons that kidnap women from Tortola. It is also here that he makes a very dangerous choice — become a vampire —and this has very dangerous consequences: the connection with the vampire prince, Niall. We follow Jonathan as he navigates dangerous relations and makes a desperate attempt to help one that had once been held a prisoner. But something more awful is on the way; the fifth prince of hell himself. Can Jonathan stop him?

Charity Parkerson is a wonderful writer and her prose gripped me from the opening lines. It begins with an encounter that is vividly captured and that sets the premise for the story as readers become curious as to how Jonathan and Cin's relationship will evolve in the story: “In a club named Consume, no less. Jonathan hated to say their eyes had met across a crowded room. Mostly because the lights were cast low and dozens of gyrating bodies separated them, but their eyes had met across a crowded room.” I also enjoyed how the author captures the flirtatious moments, the ability to explore the emotions of the characters, and the gift of plot. The unpredictability in the plot is one of the strong points of this engrossing story. Hellish is brilliantly written, at times sizzling and most of the time exploring the psychological and emotional depth of the characters. It’s a page-turner.