Talk to the Hoof 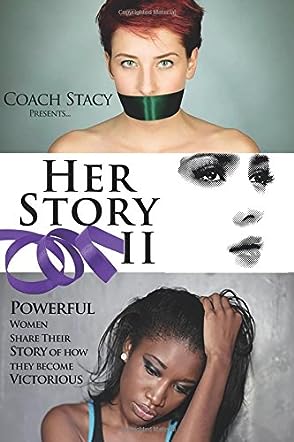 Google Stacy Bryant or Coach Stacy, author of Her Story 11, and you won’t find a personal website for her. But you will find her beautiful, strong face in photos and videos on her two Facebook pages, “Coach Stacy” and “Stiletto Bosses.” You can also watch and listen on YouTube, where she tells you about her own battles with domestic violence, and about this book, a poignant collection of “true confessions” by Stacy and 11 other victims/survivors of violence against women by their partners and spouses. As Bryant states in the introduction to Her Story 11, many of the details in the stories are graphic and raw, so prepare yourself to be shocked, sometimes sickened, but ever in awe of the courage of these women to put up with this kind of abuse, and even more so, to now share it in Her Story 11.

Bryant tells us in the YouTube video how she believes in the power of the pen to heal. She is so right. And healing is what each of these women needed after being physically and mentally abused by their partners. Many found their ultimate healing through God, but before that the healing had to begin from within, by learning to value themselves as human beings, and not just be a man’s plaything, a doll in her husband’s home, or something to show off to friends. Notice the accent here is on the woman being seen more as a thing, a possession, like a car, than as a human being.

Several of the writers in Her Story 11 are, or were, like Bryant, military women. And many of them, again like Bryant, are today involved in helping other victims of domestic abuse cope with life after abuse. Just about all of them were drawn physically, strongly and quickly to their abusers, often handsome, charismatic men. And for too many of these women, lust and love were intertwined so fast that, once the abuse started, both of those died and left them wondering how to get out of the hell in which they, and often their children, then tried to exist. Adding to their struggles were families on both sides who refused to believe their stories or blamed them, not the abusers, for what happened. Sadly, these are tales as old as time when it comes to the roles of so many women in societies and cultures worldwide. But what Her Story 11 shows through these writers, including Stacy, is the incredible resilience, strength and ability of women to rise above their situations if they believe in themselves and their right to better lives for themselves and their children.

There is no question that the stories in Her Story 11 will resonate with thousands of women throughout the world, making this a must-read collection by those hoping to believe there is a light at the end of the tunnel of domestic abuse. Bravo Stacy Bryant for publishing this collection for so many who need to read it. Her Story 11 comes complete with each writer’s bio, name, and links to their websites, and all under one of best book covers ever!