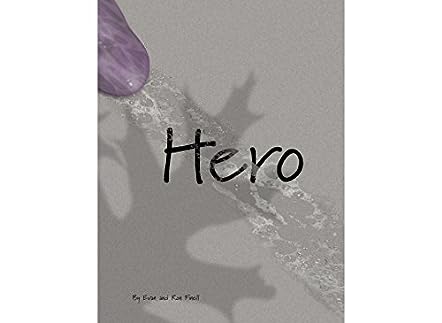 Hero is a natural science-related story written and illustrated by Ron Finell, which is based upon his son Evan’s seventh-grade English project. Nelson was a leopard slug, which in itself was something special, but Nelson’s brilliantly purple skin, which was adorned with bright green spots, and larger than average size, marked him as a most special slug indeed. He was also a freak of nature in that his brilliantly colored guise warned of no special venomous properties, as was normally found in nature’s more flamboyantly attired creatures. Nelson, himself, was ambivalent about his appearance, fearing a resemblance to the despised TV dinosaur Barney, a resemblance that others seemed to delight in bringing to his attention. But life was altogether good in the garden where Nelson lived. He had a best friend, who just happened to be a mole named Underthegroundbyatree, a creature that ordinarily ate slugs but did enjoy Nelson’s company, and his heart had been captured by a most appealing female slug named Maxine. Nelson wanted more though; aspirations of greatness coursed through his veins. He wanted to do “something meaningful, something extraordinary, something...heroic.” Not a mean feat for a creature whose reaction to stress was generally to curl oneself up into a ball and freeze.

Did you know that one teaspoon of snail slime can absorb two cups of water? As I read Ron Finell’s natural science-related story, Hero, I couldn’t help but get involved in the fascinating story of the secret life of this bright purple slug, his mole buddy and the garden that was their world. Finell weaves a captivating tale indeed about a most unlikely hero, a humble gastropod, who is really quite a lot more than the icky slime-bot most people consider slugs to be. I loved learning about slugs and moles and discovered anew how miraculous nature actually is in all her permutations. Finell’s story is marvelous, and his illustrations work so very well with his story. Somehow he makes the reader see the world through a slug’s eye stalks, and it’s not all that different from the world we see, except when it isn’t. Hero is a most impressive merging of science and fantasy that, while geared toward children, should be on the reading list of anyone who’s ever experienced the awe to be found in dew-kissed blades of grass, bright sunshine and the shiny, meandering trail left by a snail. Hero is not to be missed -- it’s most highly recommended.