Perfection and Other Illusive Things The Road Not Taken 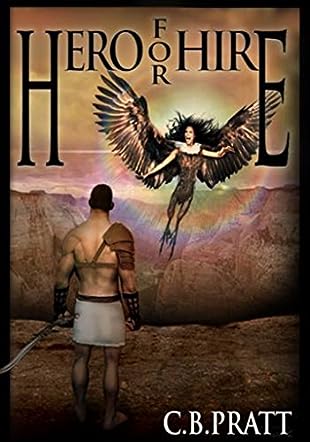 C.B. Pratt moved to Orlando, Florida two years ago after living in every quarter of the USA. A life-long interest in fantasy fiction has flowered into the adventures of Eno the Thracian, Hero for Hire. So far, she's had careers in fine jewelry sales, politics, writing professionally, and motherhood. "One of the best things about life is that you never know what's coming next."

Hero For Hire by C.B. Pratt pulls you into the world of Eno the Thracian, and is told in the first person narrative. While most heroes and soldiers are off fighting in the Trojan war, Eno accepts a job dealing with a harpy that's been harassing a kingdom. It's in this kingdom that Eno acquires a sidekick, Phandros. A rather suspicious character at first, Phandros proves himself to be of great value. Never one to miss a beat, Eno is certain that selling the captured harpy will bring him enough money to buy the hand of the maiden he's become enamored with. Betrayal by his friend, a ship's captain, sends Eno on yet another adventure as he now must rescue his stolen harpy. As soon as he and Phandros get off the mysterious island his “friend” has stranded them on, that is!

In Hero For Hire, C.B. Pratt did a great job of weaving mythology with historical references, and I loved Eno. He's a down-to-earth hero, not overly confident, but he certainly got the job done in every case. I didn't care for Phandros when he first came on the scene, and was fairly suspicious of him, but I ended up really liking him; he was a great companion to Eno. Superb character building and descriptive writing puts you in the action, and I walked alongside Eno effortlessly as he told me his tales. The book didn't end the way I thought it would, but since it is the first book of a trilogy, I didn't mind. I look forward to seeing what else this hero will be tasked with in the next book!