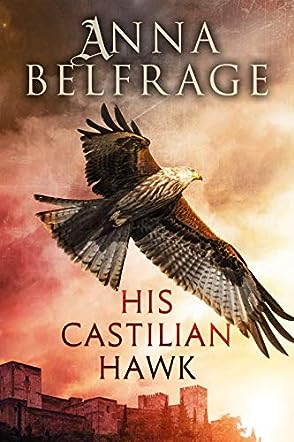 His Castilian Hawk (The Castilian Saga Book 1) by Anna Belfrage takes us back in time to the mid-1200s and the time of the Plantagenet kings of England, notably Edward I, or Edward Longshanks, in recognition of his uncommon height. Robert FitzStephan, the bastard son of an English lord, has fought with his loyal band of men alongside Edward I through all of his campaigns, including his crusade to the Holy Land. In recognition of his service, Robert was granted a marriage to the heiress Eleanor d’Outremer and her lands. What Eleanor, a descendant of Castilian royalty, was initially unaware of, however, was that she was only an heiress by virtue of Robert having killed her father and brother when it appeared that they were making an attack on the king. Faced with rebellion by the Welsh princes, Edward was determined to crush Wales once and forever and bring it under the protection and control of the English monarchy. The newly married Robert was to spend little time at his new residence and with his new bride as he joined the king in scouring the Welsh countryside for remnants of the Welsh rebellion that must be crushed mercilessly. Confounding the young couple’s attempts to discover love and affection in this arranged marriage were Eleanor’s obscure and little-known origins and familial relationship to Edward I’s beloved queen, a Castilian princess as well as the Queen of England. Can the couple find true love and trust when so much is hidden from each other, including Robert’s long-term relationship with the bitter but beautiful camp-girl, Edith?

As a lover of historical fiction, especially that rooted in fact and real events, I found His Castilian Hawk enthralling and captivating. Author Anna Belfrage drags the reader into the socially unjust and violent world of medieval England, where the king’s power is almost absolute and the aristocracy rules the ordinary people with an iron fist. Belfrage’s style is compelling and despite this being a full-size novel, I zipped through it with barely a break. I know it is a cliché but this really is one read that is impossible to put down. I loved the two main characters, Robert and Noor. Both were flawed, yes, but each had a heart for their enemy and indeed the common man. Their love was always destined to be troublesome, especially given the complicated mix of their backgrounds and hidden secrets, yet they strive to achieve something meaningful from their forced marriage. The battle and fight scenes are frequent and detailed enough to keep the most fervent action-junkie satisfied while the love scenes are tender, sweet, and almost the perfect foil to the violence and filth that surrounded people of this time and place. I particularly enjoyed the camaraderie and roughness of Robert’s men juxtaposed against the new emerging, caring husband he was becoming. The idea of a bastard child being able to rise through the social strata to knighthood and landholder at that time was a testament to Robert’s tenacity, character, and loyalty. This gave the story added layers of interest and meaning. I am totally entranced by this tale and look forward excitedly to book two in the Castilian adventure, having become completely invested in these two characters.

His Castilian Hawk is a work of fiction in the historical fiction, interpersonal drama, and romance sub-genres, and was penned by author Anna Belfrage. Written as the opening novel to The Castilian Saga book series, the work is recommended for more mature readers owing to some moderate scenes of a sexual nature and the presence of occasional violence appropriate to the historical period. Set during the time of King Edward I, we find ourselves amid the battle to bring the country of Wales under English control. Robert FitzStephan is a loyal servant to the King, but when he is handed Eleanor d’Outremer, her family ties and rebellious spirit complicate matters more than he could ever anticipate.

Author Anna Belfrage does a fantastic job of bringing this under-represented area of British history to life and does so with a great passion for storytelling. As a Welsh native myself, it was fantastic to see the level of detail put into Edward’s reign of terror and his brutal methods, and it made me sympathize with Noor (Eleanor) all the more. The arranged marriage trope can be so terribly overused in historical fiction, so it was wonderful to see an accurate representation of the difficulties of this arrangement for women, and how they could still be brave and forthright despite the restrictions placed on them. Robert’s journey as a character is suitably complex as his perspective shifts, making a fully rounded central pair. Overall, I would highly recommend His Castilian Hawk for fans of accurate historical fiction and romance.

His Castilian Hawk is the first book in The Castilian Saga by Anna Belfrage. Eleanor, “Noor,” is alone in the world now that her brother and father are dead. Her grief only increases when she must marry Robert FitzStephan, a man she doesn’t even know. But duty is duty, and she must follow orders. However, marriage to a stranger is not easy, especially when his mistress is still in his life. To make matters worse, she finds out that Robert serves King Edward I, and the king wants to bring Wales under his thumb. But Noor cannot have that, and she needs to protect the Welsh princes from the clutches of the king. Robert does not expect to like his wife as much as he does. He marries her on orders of the king, but there is something about his spirited wife that calls to him. She is brave, intelligent and she wants something from him that he cannot give. Noor wants the impossible from him. Can he give her what she wants, or will it be considered a betrayal by his king?

I am a sucker for a good romance, and this one takes the top spot this year. I love it when authors add romance to a plot because that makes the reader experience it so much better. There is pride in the way Eleanor demands to be called Noor, a trait that I love about her the most. She and Robert clash a lot, but as the story progresses, they both come to an understanding. Their romance isn’t easy, they work hard for it, and readers are rewarded. The narrative is smooth, fluid, and incredibly well-paced. Anna Belfrage introduces new characters, new subplots, and new suspense bit by bit and gives her all to each of the elements. There is a mastery in the way the story unfolds. It lures readers in and makes them stay until the end. Each character has a purpose, and that purpose gets explained as the story progresses. His Castilian Hawk is a must-read for romance enthusiasts who love a solid plotline. Brilliant and entertaining.