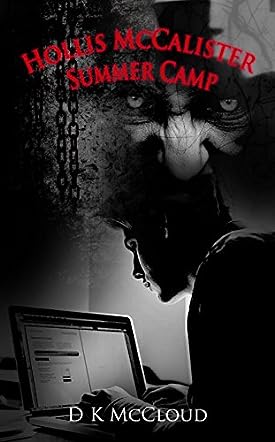 Hollis McCalister is a typical nerdy teenager, who is only trying to survive high school on a daily basis, as well as constant bullying from one of his peers. His life is not easy. Apart from being shy, and really unhappy because of the whole bullying situation at school, Hollis likes to escape reality by playing and designing computer games, hoping that one day he will make the greatest game in the world! But, the inspiration for a quality story for the game does not come easy to Hollis, because of all the stress he is going through. Hollis McCalister by DK McCloud gives the reader an opportunity to experience what goes on in the creative young mind of a teenager, using twists and turns throughout this journey into adulthood.

As it turns out, that journey is marked by going to a summer camp, which Hollis desperately and unsuccessfully tries to avoid, as he thinks he is too old for it. Unfortunately, Hollis experiences bullying from the same boy from school, even at the camp, so he tries to distance himself from it, and goes on a wander into the woods to think things through. What happens next is going to excite and amaze the reader, as it is unexpected and supernatural at the same time! Throughout this journey of finding himself, Hollis makes new friends, gets stronger and more resilient, falls in love, and becomes a warrior on a quest to save his best friend from the likes of vampires, wereboons, and other scary monsters. DK McCloud very openly tackles the complicated issue of bullying, describing what is going on in a young person's mind and with his/her emotional state when they are exposed to heavy, constant bullying, and how they learn to grow stronger in mind and body, how they learn to stand up for themselves and fight back.