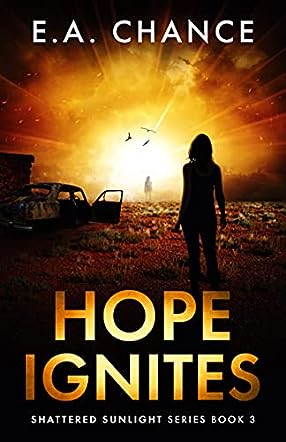 A doctor leaves her job and family behind to rescue her oldest daughter from a prison camp in the thrilling dystopian novel, Hope Ignites by E.A. Chance. Two years ago, a solar flare brought the world to a halt, and the power-hungry vice president took over. Dr. Riley Poole Cooper and her oldest daughter Julia were at a conference on the east coast when it hit. Her two younger children and parents remained behind in Colorado, and after many hardships, Riley and her new husband, Coop, made it back home. Unfortunately, Julia was captured and placed in a prison camp. When Riley receives the location where Julia is incarcerated, Riley drops everything and begins the dangerous journey to rescue her daughter. Because she left without telling Coop, her colleagues, or her family, Riley is on her own. Unfortunately, when Riley reaches her destination, she discovers that Julia is no longer there. Despite the fact she is confronted with poisonous rattlesnakes, drug runners, capture, prison camp, and her nemesis, Colonel Yeager, Riley is determined to rescue her daughter. With everything going against her, can Riley survive?

Hope Ignites: A Post-apocalyptic Family Adventure (Shattered Sunlight Book 3) by E.A. Chance is a thrilling dystopian novel. Brimming with excitement and danger from the first page until the last, this book is a spellbinding and unforgettable adventure. With a riveting plot and gripping scenes, the intensity escalates to an exciting and explosive conclusion. Building on the previous novels, the background and the characters are well-defined and relatable, giving this book the ability to be read as a standalone. Everyone who enjoys post-apocalyptic dystopian novels with strong heroines will not want to miss this series!

Hope Ignites is a work of fiction in the science fiction and dystopian genres and serves as the third installment in the Shattered Sunlight series. It is suitable for all ages and was penned by E. A. Chance. Hope Ignites expands upon the story of Dr. Riley Poole as she continues to work in a field hospital after billions of people were killed by a colossal solar flare. When she learns that her missing daughter is alive but held captive, Riley abandons her post to go save her. But the road ahead is deadly with new foes and old alike, and it will take everything Riley has to save her daughter.

There is an excellent pace to Hope Ignites: Shattered Sunlight Book 3, which is maintained throughout, ensuring that the reader never wants to put their copy down until the end of the very last chapter. It is exciting and skillfully written by E. A. Chance, who has created a deadly world of adventure for the characters to inhabit. Riley is a brilliant lead character, well developed over the course of the story, and someone I was always rooting for as the adventure played out. Each obstacle felt like a natural escalation over the previous one, with the danger steadily growing throughout the story, but Riley and her allies only grow stronger in the face of it. If you haven’t read the previous entries of the series, this book stands on its own. Having read it now, I’ll definitely be looking for the first two books in the Shattered Sunlight series.

Hope Ignites: A Post-apocalyptic Family Adventure (Shattered Sunlight Book 3) by E.A. Chance is a whirlwind adventure story about Dr. Riley Poole who tries to rescue her daughter from an enemy internment camp. When a Coronal Mass Ejection destroyed most of industrial civilization on Earth and plunged the USA into a civil war, her daughter got trapped in the dictatorial half of America. It took her mother two years to find her whereabouts, and she must traverse the USA on horseback, facing grave dangers and beating incredible odds, to find Julia and bring her home. On her trek, she makes new friends who help her with her quest and get her across the frontline between the two warring armies. Time and again, she runs into setbacks and life-threatening accidents, but she perseveres until the bitter end. The success of her mission hangs on a very thin thread until the last pages of the book.

Hope Ignites is very well written in the tradition of cliffhanger adventure stories, making the reader gasp with shock again and again, unable to put the book down, rooting for the heroes and fearing the villains. The characters are finely drawn, their psychology and motivation are well explained and completely believable. Dr. Poole’s courage is admirable and inspiring, and all the secondary characters are life-like. The writing is clear and the novel is structured in an easy-to-follow linear progression with the occasional flashback to events and characters from the first two volumes of the trilogy. However, this volume is equally enjoyable as a standalone novel. If you are looking for a page-turner infused with deep humanity, E.A. Chance’s Hope Ignites is highly recommended.