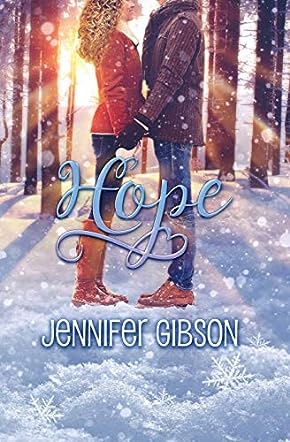 Hope: Book 4 is a young adult coming of age novel written by Jennifer Gibson. Jessie’s life was poised on the brink of big changes. She had been accepted at Sheridan College, whose illustration program was both challenging and world-renowned, but Jessie was used to challenges. Her life had been filled with them ever since she lost most of her hearing at the age of five from meningitis. Later, what little hearing she had retained had been lost through a reaction to medication. Still, with the help of her parents, she had persisted in overcoming any impediments to her progress. She was skilled at lip-reading and had the tech necessary to enable her to catch everything her teachers said in class.

Jessie had also finally been awarded her black belt in karate and was a popular instructor in Sensei Jonas’ school. Her boyfriend, Ethan, was also a black belt and an instructor. They’d be going to different schools next fall, but the two of them were unfazed by the separation and confident in their relationship. Then everything changed. During a spirited sparring bout, Ethan’s foot connected with Jessie’s helmet, and the doctor at the ER said she’d have to give up contact sports. Jessie’s world suddenly seemed to contract as she lashed out at Ethan and saw her beloved karate gone forever. Her confidence shattered, she began to wonder if she could meet the demands of Sheridan College’s program. Could she summon up the grit that had kept her going through those countless challenges?

Jennifer Gibson’s young adult coming of age/social issues novel, Hope, is the fourth book in the series that features Jessie McIntyre, a young, hearing disabled woman. I had not read any of the previous books in the series, but found myself smoothly integrated into, and involved in, the story of this engaging character. Gibson’s story gives the reader a sobering look into the challenges faced on an everyday basis by people who are seen by the rest of the world as disabled. I was stunned by the children’s comments that their parents didn’t think she should be teaching them as well as by the fencers who resented her presence in their class. Jessie’s world is a complex one as she navigates the reactions of teachers, fellow students, and the rest of the world while juggling the difficulties of living in a mostly silent world. Like most people, I suspect, I thought hearing aids could restore full hearing -- just one of the things I learned from being a part of Jessie’s world while reading this book. And yes, I finished the book thinking that the world needs a few more heroes like Jessie McIntyre and her new school friend, Jackson, to look up to. Hope is most highly recommended.