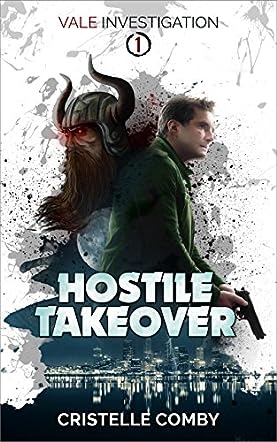 Any normal human beings who complain about their horrible bosses should be ashamed. Thirty-three-year-old private investigator Bellamy Vale has a contract with Death herself. Her commands must be obeyed if Vale wants to keep living. A savage beast is randomly killing residents of Cold City, and it’s Vale’s job to put an end to it. However, after several investigations, Vale realizes that there’s more to the task that his boss didn’t bother to tell him.

Hostile Takeover (Vale Investigation, Book 1) by Cristelle Comby is highly engaging from the start. Set in a fictitious city, the plot is well structured with a good pace. The characterization is one of the best I’ve read. Vale comes across as a P.I. who perhaps has too much empathy than he should in his line of work, which he himself confesses when contemplating trying to save a young girl from mobsters. His name suits his character and profession. As the story progresses, there’s a drip feed of details regarding his past which complement the storytelling of the present. He butts heads with Det. Lieutenant Morgan－who thinks Vale is an absolute pest－every time they share the same space, while Vale’s ex-flame, Sergeant Melanie Ramirez, only has enough tolerance for him. On the other hand, a relentless reporter, Candice Kennedy, manage to get on Vale’s nerves. Without revealing any spoilers, Vale, Kennedy, and Vale’s good friend, Zian, have a good chemistry between them and make a good team.

The prose has the flair that will make noir fans happy. Comby doesn’t take any characters for granted. The supporting characters fully do their bit in moving the plot forward, providing clues and initiating important events for the protagonists. Overall, the noir-esque component, the humor, the suspense, and the action blend well with the fantasy aspect of the story. This is a great start to the series from Comby, and I look forward to reading the sequel.