You Will Never Be Normal 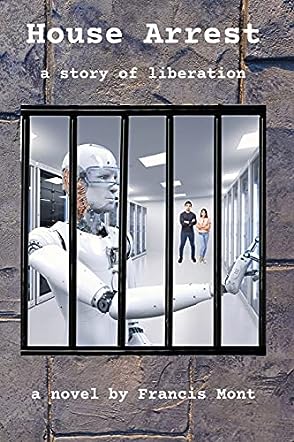 Francis Mont’s House Arrest: A Story of Liberation transcends the sensation and spectacle typical of many science fiction novels. What you get here is something that could be called a prophetic vision of the future. This is post-nuclear war America, set in 2098, where a prologue introduces the background of how the country fell into ruins. Oroville is one of the cities trying to survive and is being managed by a central computer called Omega 1500, aka Big Brain, that mobilizes hundreds of robots to take care of all activities. Humans have become obsolete. As the population continues to live in a state of unrest, a proposal for change is made: Train compassionate, empathic, socially responsible citizens to take over the service sector and replace the robots. It’s a resolution that humans can live with, but will Big Brain and its robots be amenable to such change?

House Arrest is a fresh addition to the science fiction genre. While Francis Mont maintains a scientific attachment to the plot, he gives it balance by bringing you inside the minds and hearts of the human characters. There are diverse sentiments found in people that have become marginalized by non-sentient beings capable of artificial thought. It may be disturbing, but it is a beautiful prediction of what could go wrong, considering that we are advancing the minute hand of the Doomsday Clock. As a writer, Mont has demonstrated an impressive flair in picturing a bleak future and the organization of its society. He has written more than just about artificial intelligence; it is about men and women and how their propensity toward freedom and justice may well bring a spark of hope and rectify what is already a chronic and oppressive social structure. It is about you and me. If you are ever in the mood to read a visionary sci-fi tale, this novel should be your priority.