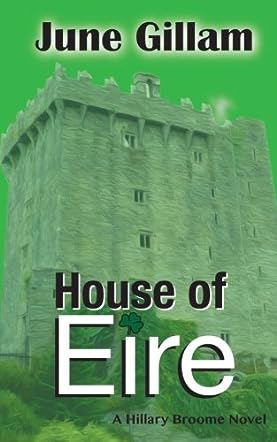 House of Eire: A Hillary Broome Novel is a murder mystery novel written by June Gillam. Hillary still couldn’t quite grasp the fact that she was finally going to Ireland. For two weeks, she, her husband, Ed, six-year-old daughter, Claire, and Sarah, the Miwok woman who was like a mother to her, and a grandmother to Claire, would be exploring the Emerald Isle. Claire was looking forward to the ghost tours and other mysterious legends she had heard about, but Hillary especially wanted to learn more about her people, her dad’s family, and the travails they experienced during the Great Famine. She also wanted to get to know Bridget, the American woman who had been engaged to Hillary’s cousin, Teddy, before he died in a car accident. She and Bridget had been Skyping for some time now. Bridget was deeply involved in Galway politics over the proposed theme park being built by a wealthy Irish-American. Lastly, Hillary saw this as the honeymoon she and Ed had never been able to have before. It had taken months of planning, and now, at last, she would be able to visit her homeland.

June Gillam’s murder mystery novel, House of Eire: A Hillary Broome Novel, is an engaging and suspenseful novel about the Broomes’ trip to Ireland amidst a bitter controversy spurred by greed and exploitation by developers. I was fascinated by the glimpses of modern Ireland that Gillam provides the reader. Like many others, I actually knew precious little about that country except for the troubles over independence and stories about the horrors experienced by Irish orphans in the asylums run by nuns, and pregnant women in the care of the Magdalene Sisters. Alongside Hillary, Sarah and Claire, the reader gets to more fully experience the country, and it’s an illuminating and lively experience. Gillam’s plot is taut and suspenseful, and her characters are well-crafted. Hillary’s interest in genealogy and her family background also adds an extra dimension to the tale. House of Eire: A Hillary Broome Novel is highly recommended.

Mysteries, murder, and ghosts ... House of Eire by June Gillam is filled with everything one could want in a paranormal detective tale. It is the story of Hillary Broome, a ghostwriter who travels to Ireland with her family to celebrate her recent wedding and research her family’s past. While there, she plans to visit her friend, Bridget. But someone is threatening Bridget, who is entangled in a controversial business deal to build an Irish theme park. Caught up in her own difficulties, Hillary arrives too late to save Bridget and now is determined to find her murderer before anyone else dear to her dies.

In House of Eire, June Gillam creates a wonderful journey filled with twists and turns, intrigue and ghost stories. The vivid writing builds a fascinating setting in Ireland, complete with old pubs and ancient towers. Gillam does a terrific job of bringing the reader into a world that is real with diverse, relatable characters to root for and cry with. I particularly like the character of Hillary Broome. Her journey is well thought out with a depth that keeps her from becoming cheesy or predictable. Hillary’s relationships with her daughter, husband, and others in her life enrich the plot, creating a story that is enjoyable and moving. The pacing easily kept me turning page after page until the end. I thoroughly enjoyed this paranormal mystery and recommend it to detective novel fans and those who love ghost stories as well. Thanks for a great read.