How I Made a Friend 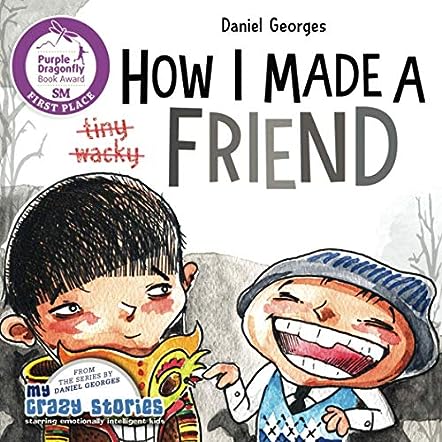 Daniel Georges passionately creates picture books that resonate with his understanding of the complexity of growing up. His quirky MY CRAZY STORIES series supports young readers in developing a deeper emotional awareness and self-confidence to better deal with the world surrounding them. Daniel's books won the attention and endorsement of juvenile literature supporting organizations among which the Anna Lindh Euro-Mediterranean Foundation and the Al Maktoum Knowledge Foundation Dubai. He also won the Purple Dragonfly Award for best picture book given by Story Monsters Ink Magazine, the renowned Children's books literary resource for teachers and school librarians across the USA. With great feedback from kids, parents and educators, MY CRAZY STORIES books are frequently featured in the All-Star Top 100 most read children's books on Amazon. www.mycrazystories.com

Meet William who was happy being alone and in his room in the story How I Made A Friend (My Crazy Stories Series) by Daniel Georges. He liked being in his room and making masks of clowns, pirates, and monsters. He liked to wake up early and walk to school. William enjoyed having the sidewalk to himself while walking. After school, he always went to the park because at that time the park was quiet and he could be alone there. He played with one of his scary masks and became the monster there. His happy little world changed when a new kid came. His family had just moved into town and the boy was everywhere, in the park and on the sidewalk. William was annoyed and became even more annoyed when his parents called them over for dinner. Would William become friends with the new kid? If so, how does it happen?

The story is delightful and teaches young readers about the importance of having good friends. The illustrations breathe life into the characters and scenes, bringing them alive. William's character and the friendship between the two boys are both real and relatable. It is a good story for reading aloud and storytelling sessions in classrooms. The 'Join the Best Friends Album' at the end of the book makes it interactive and entertaining for readers. It is a good story to help children understand friendships and their emotions, how good things can happen unexpectedly and suddenly, just like how William found a friend when he least expected it to happen.