The Siren of Good Intentions 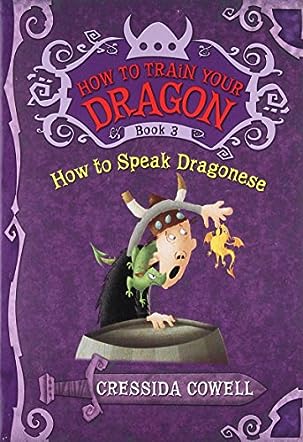 Hiccup Horrendous Haddock III is back. As the Viking hero continues his memoirs, translated from the Old Norse by Cressida Cowell, the 12-year-old son and heir of Stoick the Vast is engaging in a lesson on boarding an enemy vessel. Leave it to Hiccup, his demanding little dragon Toothless, his friend and fellow unlikely hero Fishlegs, and sleepy dragon Horrorcow to become separated from the group. Instead of boarding a peaceful fishing boat, the boys and their dragons find the ship they've landed on is a Roman one. As Hiccup hides, he overhears the prefect (really Alvin the Treacherous in a dastardly new role) and the grossly overweight consul planning to capture all the dragons on Berk and take them to Rome. While listening to the plot, our hero manages to save a tiny nanodragon from becoming part of the consul’s meal. As he sneaks away, Hiccup opens a dragon-filled cage, and the angry beasts attack and set fire to the ship. The boys and Horrorcow escape, but Toothless is not so fortunate: he is captured by the Romans. After the threesome finally arrives home on Berk, Hiccup faces Stoick, who is (again) disappointed in his son’s lack of ability.

However, things are about to get worse. Romans disguised as members of the Bog-Burglers, a female Viking clan, capture Hiccup and Fishlegs. The boys’ destination is the frightening Fort Sinister, where the prefect awaits. Rather than killing the boys outright, their nemesis decides to have them engage in combat in the arena. Confined in a tower, they meet Camicazi, a small, tough girl who happens to be the Bog-Burglar heir, and whose sword-fighting abilities equal Hiccup’s. Will the three youngsters — and a dragon no bigger than an insect - be able to survive the arena?

This third book in Cressida Cowell’s series is full of over-the-top wackiness, adventure, heroism, and enough plot twists to satisfy fans of the first two “memoirs.” David Tennant’s imaginative, lively narration in the audio book format is a perfect match for the story line. Kids and adults alike will appreciate the victory of brains over brawn. As the elder Hiccup counsels, one must battle with “the power of our brains and our thoughts and our dreams.”