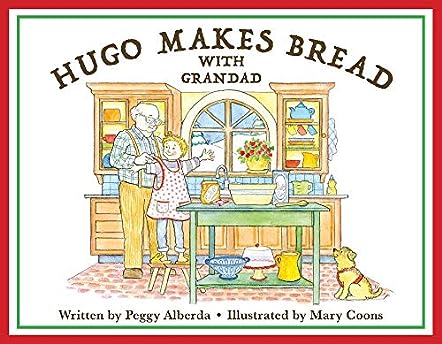 Peggy Alberda is a wife, mother, grandmother and owner of Restored To Glory Dance Ministry in Leo IN. Her friends and family call her an “expert in coziness” with her uncanny ability to make others feel at home. Peggy and her husband Joel make all of their own bread. They have passed this tradition on to their children and now grandchildren. For so many it has been a gift of not only food but of love and home as well. Peggy resides in Indiana with her husband and their Havapoo, Lulu.

What kind of bread do you eat? Store-bought or homemade? Hugo eats store-bought bread at home, but when he visits his grandparents, he enjoys their homemade bread. On one visit, Grandad decides it’s time to teach Hugo how to make his special oatmeal bread. Together they work in the kitchen, going through all the steps necessary for making the bread dough. After kneading it, they place it in a bowl in a warm, dry place “to take a nap.” It’s naptime for Hugo, too, but it takes a little convincing to get him to lie down for a nap. After explaining that the bread needed this “quiet time,” too, Hugo takes his nap and lets the bread magic do its work.

Peggy Alberda’s picture book story, Hugo Makes Bread With Grandad, is a heartwarming story that emphasizes the special bond that exists between grandparents and their grandchildren. The plot follows Hugo’s adventure of making bread with Grandad. It leads the young reader through the many steps, adding interesting anecdotes into the compassionate conversation between Hugo and his Grandad and his Grandma. The warmth of affection between the three is obvious as it kneads its way, quite literally, into the dough. Hugo learns that making bread is hard work, but it’s not difficult, and the end result is worth the effort especially when he gets to share his very own loaf of bread with his grandparents. At the end of the book is Grandad’s special oatmeal bread recipe so young readers can make their own bread, too. Beautiful illustrations. Told with love and compassion.