I Dare You to Try It 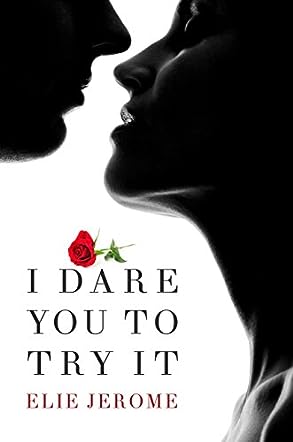 Born in Haiti, Elie Jerome started writing poetry when he was 13 years old after the death of his mother. Writing became his escaped route. In 2004, he began working on his own biography. After writing many unfinished stories, Elie published his first book: “I Dare You To Try It” in 2015. His goal is to allow his readers to connect and even to believe they will meet one day the characters he creates. With an unique and easy read style, he gives the readers vivid stories that are breathtaking, fascinating, full of twists, and mind-blowing. Read him once and become his fan forever. Stay tuned for his second novel: "This Is Life (C'est La Vie)" coming in Summer 2017.

I Dare You to Try It is a contemporary romantic novel written by Elie Jerome. The gentleman worked several jobs to help his younger brother, Gabriel, finish his schooling. Since their parents died, the gentleman took it upon himself as his responsibility to take care of his brother. One of his jobs was as a security guard with Team Undercover, an agency that provided such services to nightclubs in Manhattan. His first Friday night gig was covering for a security guard who was on vacation. The Flow was a bar and restaurant that had a large dance area and was open until 4 a.m. It was a popular venue that drew large crowds on Friday nights, and the bouncers had to be aware of the capacity limits at all times. The gentleman was polite and efficient as he checked the IDs of the patrons and kept control over any rowdiness. He was working alongside Antoine Perez, an outgoing and friendly guy, who wondered at the gentleman's stiffness and reticence, especially when it came to the female patrons. The gentleman’s interest was held, sometime later that night, by three women who were walking past The Flow, after having spent the evening at another club. The youngest one stopped and asked him to hug her mom who was visiting the city for the first time. As he considered her and her request, he could see in the other women's faces their hopes that he would honor her request, and he did.

Elie Jerome's contemporary romantic novel, I Dare You to Try It, is a well-written and compelling tale about love, friendship, and romance in the big city. The gentleman and Laurie's impromptu meeting outside The Flow is charming and feels straight out of a fairy tale romance. This effect is heightened as she sets the gentleman a quest to find her within a week’s time. But the course of true love, as many fairy tale romances show, rarely runs true and smoothly, especially when there are jealous and scheming people pretending to be friends and giving the worst possible advice. Jerome's plot is inspired, and his characters are well-defined and believable. While the two main characters are deftly portrayed, Jerome's supporting cast, especially Gabriel, the gentleman's brother, and Carlette, Laurie's mother, and her friend, Anne, are also marvelous characters given life and dimension by this perceptive and thoughtful author. I Dare You to Try It is highly recommended.

I Dare You To Try It follows the chance encounter of the bouncer (also referred to as 'the gentleman') and Laurie, an administrative assistant on Wall Street. What seems like an innocent meeting after leaving a New York club turns fate on its head. Laurie asks the bouncer for a kiss, and the two of them feel a connection that shocks them both. Unfortunately, Laurie is nursing a broken heart, and is not ready to open up to any man, especially someone she sees as 'just a bouncer' (although she feels bad that she sees him as such). She disappears with a challenge to him - find me!

Elie Jerome has created a story from a chance encounter, reminding the reader that every person put on your path could be the person you were meant to spend the rest of your life with, or at least someone who is meant to be a very important part of your life. Things that seem random or meaningless, such as a chance kiss that was meant to be nothing but a fun moment, end up turning your world upside-down.

I Dare You To Try It moves quickly, taking you from interest to obsession, passion to pain, despair to happiness. It challenges your perception of friendships and makes you question who you can trust. At the same time, it makes you believe in love at first sight, and finding your soulmate who wakes your heart with a single kiss.

Elie Jerome’s I Dare You to Try It unravels in a bar and restaurant called The Flow in New York’s West Village, where a bouncer is challenged by a young woman for a kiss. This starts an unlikely friendship that soon develops into a romance, but Laurie Lugbowskovsky, an assistant director of marketing in an independent investment bank on Wall Street, is nursing a broken heart and does not feel ready for a relationship. Her best friend, Barbara, also discourages her from going into a relationship with a mere bouncer. Laurie stops herself from getting deeply involved with the bouncer, but realizes that she cannot ignore her feelings for him. What follows is a chain of events that finds the three of them entangled in a love triangle. Will real love triumph in the end?

I Dare You to Try It is a fast read and it is about the budding romance between a bouncer and a marketing executive. As the story progresses, a messy love triangle is revealed. Author Elie Jerome’s characters are certainly not predictable, but despite this, it is not that difficult to relate to them. This is probably because the characters are well developed and, as such, readers will easily understand why they behave the way they do. Also, the story is compact and easy to follow since the author leaves no loose threads in the plot. In the end, a true resolution is arrived at and the ending is definite. I Dare You to Try It is a love story in the real sense of the words and this is the reason why it is a fun read too.