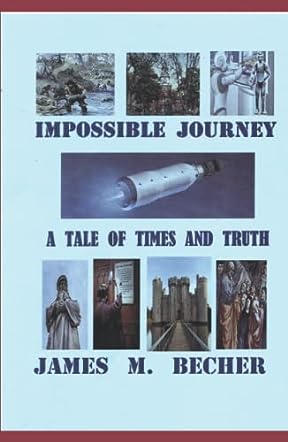 I was born on June 8, 1943 of a Christian family and accepted Christ at an early age. Interested in writing since High School I, got A's in English Grammar, and wrote write several short stories, poems and articles, usually incorporating my faith into my writings. I attended Bob Jones University., and Clearwater Christian College, graduating with a B.A. in Bible-lit. I went on to Biblical School of Theology in Hatfield, Pennsylvania, graduating in 1974 with a M.Div. Ordained in November of 1974, I served in different areas of Ministry, one of which was a foreign student ministry, which is also where I started writing my Biblical novel, and then a friend suggested to me the bare basic premise of this novel--time-travelers trying to reach the beginning to prevent evil. Being interested in various historical periods, I decided to run with it and began to flesh out the details. It was there also where I met my dear wife, Berenice from Venezuela. We were married in 1980, and went to Venezuela in 1989 for an extended stay, where, along with teaching English I completed the time travel novel, "Impossible Journey, A tale of times and Truth," using a friend's computer Upon returning to the US, I also completed the Biblical novel, "Of Such Is The Kingdom".Kingdom".

Impossible Journey: A Tale of Times and Truth by James M. Becher tells the story of Walt, Will, and David, who in 2025 get into a time-traveling capsule with the goal of solving all the problems of the world by returning to Eden to prevent the serpent from convincing Eve to eat the apple. Their time machine is a little rickety, though, and can only make small jumps back in time before it has to be repaired. The travelers land in the gold rush, the times of Leonardo da Vinci, Martin Luther, Camelot, and they get caught up in someone else’s time travel efforts and get launched into a future where the world is falling apart. They even land in 33 A.D. just in time to witness Jesus’ crucifixion. Most places they go there are people talking about Jesus. The men get really tired of it until, finally, it all makes sense.

Impossible Journey is narrated in a very casual tone, “The morning finds our friends rising bright and early…,” and the characters break all the commonly accepted rules of time travel. That bothered me a little but was made up for by the fact that I found Becher’s premise fascinating and I wanted to see where he was going with it. The characters have no qualms about changing history – that’s why they’re making the journey. They freely tell historical figures where they’re from and they interfere in events they encounter. When they find themselves with a stowaway from another time, they accidentally leave him in the wrong century without any worries of disrupting the space-time continuum. Although the three men are from different faith traditions, Impossible Journey is definitely a work of Christian fiction, almost like a very long Bible tract embedded in the story. I found it hard to equate Impossible Journey to any other works, although occasionally it reminded me a little of Pilgrim’s Progress. It is suitable for all audiences.