In The Event the Flower Girl Explodes 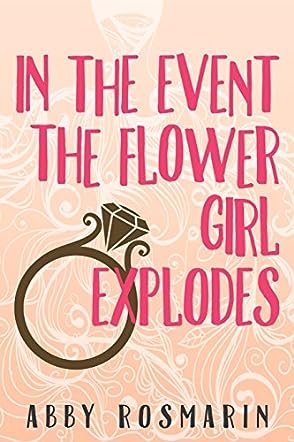 Abby Rosmarin is the author of In The Event the Flower Girl Explodes, I'm Just Here for the Free Scrutiny, Chick Lit & Other Formulas for Life, and No One Reads Poetry: A Collection of Poems. Her work has been featured on the Huffington Post, Bustle, Thought Catalog, and others. Abby can be found on Instagram & Twitter @thatabbyrose and her blog at thatabbyrose.wordpress.com.

In The Event the Flower Girl Explodes is a contemporary new adult fiction novel written by Abby Rosmarin. Nicole had kept on putting off asking for time off for her brother’s wedding, knowing that she had to do it, but hating the fact that taking the time off could jeopardize her chances of getting hired on as a permanent worker. When she finally did pluck up the courage to ask her boss, the wedding was only a week away, so it was not only an imposition as a temp worker, but it was on short notice as well. To make matters even worse, Cassandra, her boss, had left Nicole feeling that she was indeed expendable and wouldn’t be missed during those three days away. When Nicole was discussing it with her girlfriend, Laura, however, Laura saw through the story to Nicole’s deeper issues. Nicole was confused and angry about Andrew’s wedding plans. Andrew had always been there for her as she was growing up. Theirs was a single-parent household, and Andrew, being a few years older, had been her protector, confidant and father-figure. Nicole and her mother had always worried about the fact that Andrew hadn’t been interested in any of the girls who tried to catch his eye while he was in high school. Now, the doctoral candidate had actually met someone and didn’t share the details with Nicole until he and Cora had been an item for four months. Six weeks later, Andrew finally arranged a time and place for his sister to meet his girlfriend.

Cora was not at all what Nicole would have expected. Nicole was comfortable in the urban world of Chicago, and was used to the understated urban-student look, so she was not at all prepared for Cora. Cora’s five-inch stilettos sparkled with glitter, and her fire-engine red, skin-tight leather pants matched her teased-out crimson tresses; then there was the floor-length fur coat she was wearing. Even worse, however, was the faux-Southern accent Cora seemed to enjoy emphasizing as she regaled Nicole and Laura with her praises of the South. How could Andrew possibly be interested in someone like her? Nicole found herself wondering just that again and again. After suffering through the somewhat tacky engagement party the couple hosted in Chicago, Nicole dreaded the wedding more than she could imagine, and she sorely missed her big brother.

In The Event the Flower Girl Explodes takes a young urban lesbian couple and plants them in a Florida suburb for a series of wedding events that will make any reader’s worst wedding, or family gathering story seem pale by comparison. Nicole is an engaging and totally likeable character, whose love of the tiny lakefront beach she’s found in Chicago spoke to my own love of the outdoors. Watching as she wrestles with accepting the strange mix of wealth and Southern culture into which Andrew is heading is fascinating and humorous all at once. Understanding the sense of turmoil and upheaval this new adult is experiencing gives this coming of age story even more impact and universal appeal. Rosmarin’s characters are well-defined and authentic, and her plot is marvelous. In The Event the Flower Girl Explodes is most highly recommended.