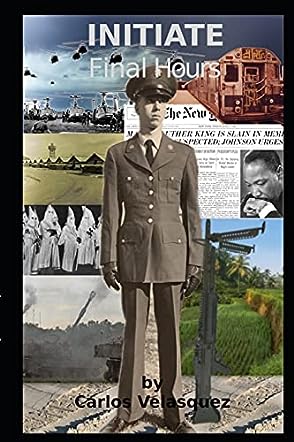 Carlos Velasquez author of Initiate: Final Hours was recently awarded a 5-Star review rating from Readers Favorites. This may not seem to be a great accomplishment, but for any first-time novelist and in navigating the world of marketing, receiving any review especially one from such a respected book reviewer is noteworthy. The story Initiate is my first writing endeavor since deciding to retire from the workforce and instead take to the pallet, the art of description (colors) and paint a story, instilled on the canvas of life experience. Over fifty years have passed since living the story Initiate, and retelling it as the protagonist has allowed me to share the joy and pain of that experience. However, experiences lived through and persevered, shape our destinies in subtle ways, resulting for me, in a lifetime of exploration, travel, and discovery; backpacking, mountain climbing, wandering in the Grand Canyon, living in a commune, encountering and knowing great people, searching for the meaning of God, and finding love, in true, full exalted splendor.
Born in Brooklyn and raised in the Bronx, during the nineteen fifties and sixties when kids played in the streets till dusk, through hard work and honesty, I have a life well lived in California, and Hawaii, before the age of computers and social media. I am now a storyteller sharing those intimacies and Initiate: Final Hours is my first story and by the grace of God there will be many more colorful canvases, depicting the marvels of life.

Initiate: Final Hours by Carlos Velasquez is a courageous and finely detailed autobiography of his three-year voluntary service in the United States Army during the Vietnam War. It includes his basic training, his one-year tour in the fighting, and the aftermath back Stateside. We first meet seventeen-year-old Carlos (in the book Carl, or Val), as he waits for processing (we later learn what kind) in Fort Bragg. Watching the clock, he recalls his time in the military. Through a series of flashbacks, we see him become an expert marksman with the M60 machine gun, then his turbulent trip across the Pacific in an aged transport ship, his perilous landing on the beach of Tuy Hoa, the rugged convoy up the mountain to Pleiku, his battle station at Bien Hoa, and his final transfer to Tan Son Nhut Airport at Saigon. There are huge spiders, venomous snakes, flies, ravenous mosquitoes, and long, nerve-wracking, solitary nights at LP (listening post) hundreds of yards into the jungle from the main encampment. Also, some encounters with area hookers and powerful cannabis. Not to mention some hair-raising meetings with the enemy.

Initiate: Final Hours by Carlos Velasquez is intense and intimately detailed. Velasquez must have a photographic memory or have been a dedicated journal-keeper. We see and hear everything from the spit shine on his boots, to his burned-off mosquito bites, to the flora and fauna, the rain, the mud, and the heat. I felt like I was right there with him, and if you have any curiosity as to the reality of a grunt’s trials in Indochina, this military memoir is for you. For me, what was excruciating to read is Velasquez’s account of the racism and injustice he experienced, especially on the home front in Fort Bragg, NC. Velasquez had his ups and downs during his service, and he describes them courageously, in-depth, and sometimes with lyrical, haunting beauty. As a Vietnam War memoir, Initiate by Carlos Velasquez ranks right up there with Tim O’Brien’s The Things They Carried. It is a must-read about the daily realities of the complicated, tragic conflict in Vietnam.

The author opens a door through which he guides you into his world with flashbacks that overtake your senses and pulls you into those seminal moments of the harsh realities of becoming an adult while having to face the life or death uncertainties of war.
There is that time when we all step from childhood into adulthood but for some that step can be a harsh and difficult experience, like steeping off a precipice into an abyss. Those of us who didn't have that experience should read this story, it will expand your humanity.