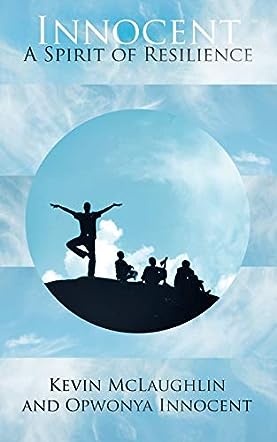 Kevin McLaughlin has a background in policy and communications work at the local, state, and federal government levels. Kevin currently resides Durham, North Carolina, where he works with local government, nonprofit agencies, local businesses and religious institutions to address issues surrounding social justice, inclusivity and community development. He earned a B.A. from Miami University in Public Administration and American Studies, and a M.P.A. from the University of North Carolina at Chapel Hill.

Opwonya Innocent was given the name Innocent at birth, as names in his culture are selected based on what the parents are facing at the time of the birth. When Innocent was born, his father was in prison for being wrongfully accused of being a spy for the rebel army. In open and honest detail, Innocent shares his life story in the book, from growing up in fear of the war, to being forced to fight in it, his eventual escape, the healing process, rare opportunities to access education, to growing in countless ways and ultimately securing a job with a non-profit through which he was able to guide and mentor children dealing with much of the same hardship he faced. Currently, Innocent is in graduate school in Germany, studying economic policy, with plans to return to Uganda with additional skills and tools for positive change.

Innocent: A Spirit of Resilience by Kevin McLaughlin and Opwonya Innocent is set against the backdrop of the unrest in northern Uganda three years after Opwonya Innocent was born, which was amid the escalating war. His father was wrongfully convicted of treason and imprisoned, hence he could not be present for Opwonya’s birth. The book chronicles Opwonya's journey, his struggles, the trauma he faced, and how it paved the way for him to help and heal others from their pain, thereby giving them hope that enabled them to make meaningful and positive changes in their lives.

The book is honest and Opwonya’s story is uplifting and will give readers hope, determination, courage, and perseverance. The story is also motivating, encouraging readers to give up anger and bitterness and work towards a peaceful existence. The narration is detailed, making the scenes vivid, and the pictures shared in the book give clarity to the words and surroundings. The story will also make many of us be grateful for our own lives as it throws light on the many others who live in dangerous and calamitous surroundings. Opwonya Innocent’s journey toward earning a graduate degree, reopening an orphanage, and making a positive impact on the future generations of Ugandans make the book an engaging and compelling read. The story will draw readers in and give them the feeling of personally knowing Opwonya Innocent. What needs to be appreciated is the way that Opwonya Innocent refuses to be depressed and disappointed by the hardships he faces, though they were not chosen by him.