An inescapable passion, a world in chaos... Their destiny carried them from the ports of Boston to the warm turquoise waters of the Bahamas
by Amal Guevin
Romance - Fantasy/Sci-Fi
346 Pages
Reviewed on 08/30/2021 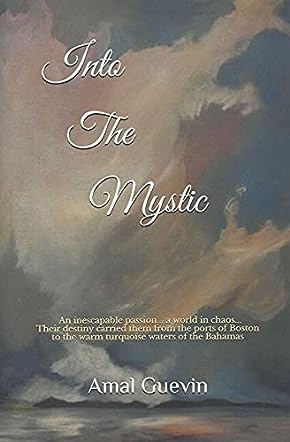 Living without electricity is almost an impossibility in today’s time. Into The Mystic by Amal Guevin introduces Daniel Devereaux, a man raised on Spanish Wells Island, until he chose to obtain his Master’s Degree in Boston. While he was located in Boston, he married Karen Sullivan, despite his family and friends not liking her. After three years of marriage, Daniel decides to divorce his wife when she is admitted to the hospital. While he’s in distress, he suddenly looks up into the face of Dr. Alea Gabrielle. Three months later, Daniel returns to the hospital as one of his best friends has been severely injured. While in the waiting room, he discovers the doctor who performed the surgery was Dr. Alea. From that moment, the two are inseparable. After 6 months, they marry and plan to spend their honeymoon on the yacht named Into The Mystic. A week later, a solar surge hits Earth, causing an electromagnetic pulse that wipes out all electricity across the planet. The yacht can only drift with the current in the Atlantic.

Amal Guevin gives readers a strong reality check in Into The Mystic. Every day, we depend on electricity to perform routine tasks. Without electricity, we would lack the ability to communicate by phone, have no news knowledge, preserve food, heat or cool our homes, and even have running water. I know many people are reliant on their cell phones and internet access for their jobs. People would run out of food, water, and medication: chaos and violence may happen when people do whatever it takes to survive. I admired Daniel’s automatic leadership role he assumes when the yacht becomes incapacitated, and his knowledge of navigation by the stars, survival skills from growing up in the Bahamas, and level-headed logic are paramount. I am rating this remarkable book a full 5 stars. The possibilities and odds of survival are all weighed up in this adventurous romance story. This is the first book of the Into The Mystic Series. I look forward to reading its sequel, as the conclusion of the book is open-ended.