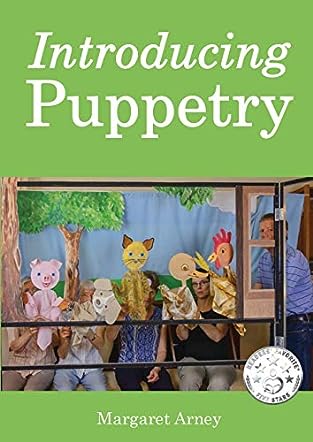 Introducing Puppetry by author Margaret Arney immediately "sells" itself book-wise with its wealth of detailed basic puppetry information, its many and varied photographs of constructing a real theater and, of course, instructions for making a puppet, a task that seems almost as easy as tracing. In Introducing Puppetry, both Arney and her team of happy puppeteers welcome us into this unique and interesting art form arena called puppetry, documented to date back more than 3000 years and most likely in Egypt. The original term for a puppet, marionette, that came from the French, around 1620, virtually means "a puppet worked by strings." For me, puppetry's parent, the theater, a well-examined item by the writer, enlightened me on what it does for the puppets. Introducing Puppetry helped me to understand how important a theater actually is! I found, too, Arney's "theatrical takes" insightful and that the theater itself is the place where the action begins and ends. And, as insightful as all of that is, there is a series of "acts" and "intermissions," a sort of stageful of unexpected creative surprises and colorful craft-making projects.

This delightful and complete primer authenticates the author's professionalism and passion. In Introducing Puppetry, Arney provides 2 distinct goals for puppet-lovers of all kinds-- from the young to the old, from the players in the theater to the audience watchers. For one, Introducing Puppetry impressed upon me can-do confidence, and for the other, Margaret Arney writes with understandable and clear directions about how to achieve real puppeteerism. If you want to learn how, or simply like leafing through photos of "people-working-at-puppetry", Introducing Puppetry will do. In my opinion, this "kids'" book equates to an education that proves way more valuable than its cost.