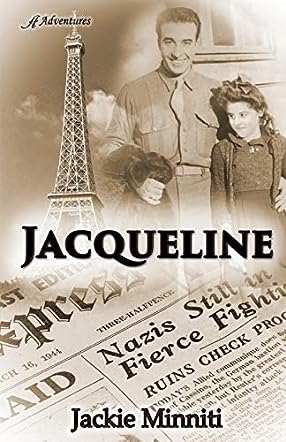 Jackie Minniti was born and raised in the heart of New Jersey where she spent 25 years as a classroom teacher and was an education writer for the Courier Post. A fter retiring from teaching, she moved to Florida and turned to writing full-time. She is currently a columnist for The Island Reporter in St. Petersburg. Her first novel, “Project June Bug,” the story of a young teacher’s efforts to help a student with ADHD, won several awards including Premier Book Awards “Book of the Year.” A number of her stories have been included in Chicken Soup for the Soul collections.
Jackie lives on Treasure Island, a small beach town on Florida’s west coast, with her husband and two rather noisy macaws, but she frequently travels back to New Jersey to visit her three children and six grandkids.

In Jacqueline, author Jackie Minniti tells a story she grew up hearing about the real life Jacqueline Falna, a young girl in war-torn France following the Nazi invasion of her country. Jacqueline’s father is missing in action and believed to be dead. Struggling with her mother to survive on minimal rations, Jacqueline carries with her the last note her father wrote her. In it, he tells her that he went off to fight so that she might know freedom one day.

When Jacqueline and her friend, David, a Jewish boy who lives with his family upstairs, are out one day, the Nazis storm their apartment building and take the remainder of David’s family into custody. Jacqueline and her mother, under the nose of a Nazi sympathizer, alter David’s appearance. Thus, he spends the last of the war under their protection. Later, when the Americans arrive to liberate the French, Jacqueline makes a friend in Bernardo, as she is convinced that he can help her to find her father. The truth she eventually discovers, although not what she’d hoped for, comes through Bernardo who tells her that if he ever has a daughter one day, he will name her after Jacqueline. (The author is that daughter.)

Books about the everyday events of those living in war-torn Europe during the Nazi days can be difficult to read. Still, it is important that those stories are passed down. Jackie Minniti, in Jacqueline, offers middle graders a look into those days. Without getting too dark, she provides a fictional account based on a real-life girl. With her struggles to remain safe, to find enough to eat, to avoid Nazi capture, and to continue to believe, Jacqueline is a role model for young readers as she struggles to remain positive, even while sacrificing for others.