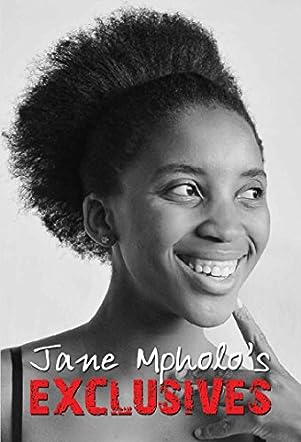 Jane Mamotse Mpholo a University of the Free State drama and theatre arts graduate from Botshabelo (free state) and a runner up for the Elsa Krantz medal for best artistic presentation 2012. She has given back to her community by helping facilitate "arts and culture" classes at Lebelo Intermediate school and has done several professional theatre performances, namely: Hairspray, The Blacks A Clown show, Masaikategang a Magodimo, Adjusted, The Climb, Waves, The 3 little Bitches,Candle light Mamorial,The Bar, Is It Safe To Masturbate On An Elecrtic Blanket?, Mafukuzela songs of freedom which she performed alongside the legendary Sibongile Khumalo as a chorus member. Festival: She performed the play Madikizela Verwoerd at the National Arts Festival (2012),Is It Safe To Masturbate On An Elecrtic Blanket? (NAF 2013) and is to perform Adjusted at NAF 2014, and The Bar (Vryfees 2014). She did a lot of student productions namely: jungle book, revolting rhymes, to be like this rock, checkmate, so what's new, spring workshop, lunch hour showcase, every women and poetry cries. She is the Writer of "The Climb (premiered 3 October 2014 at The University of the Free State) ", and "Waves (Premiered at the Platteland Preview Festival 27 June 2015". Co writer and actor of "Adjusted" (premiered May 2013 at PACOFS), "I am" (premiered August 2012 Social Justice week UOFS) , "The 3 little Bitches (NAF 2015)"and "Motsamai"(2012). Industrial theatre pieces: Gateway, Kovsie Lane, city on the move , vryfestival (kasi), kovsie life and myths about disabilities. Technicals: Volksblaad arts festival as an usher (2010-2011) and stagehand(2012), sound and lighting for cinderella's final dress rehearsal and recorded a radio voice over for UFS Qwaqwa campus graduations. You can have a piece of her on the shortfilm she cowrote and starred in "Abuse Factory" http://t.co/VIX4IBu5Tf
She also published 2 books (Jane Mpholo's Exclusives and Freedom")

Jane Mpholo's Exclusives by Jane Mpholo is the autobiography of Jane Mamotse Mpholo, her childhood, growing up, and how she came to study Drama and Theater Arts at the University of the Free State to become a professional actress. Her childhood dreams and later years, how she had to go through messy engagements, fun and frolics with her peers like faking pregnancy and abortion are some of the highlights of this book. She also speaks of her deep attachment to her mother, as well as her sister. Instances like how her half brothers kept them all on tenterhooks add suspense to this. She continues with the free flow of candid thoughts on many other strange incidents of her life.

Jane Mpholo's Exclusives by Jane Mpholo is an enjoyable read. It was really interesting to read that as a child she thought pimples were mayonnaise coming out of the face and stopped eating that. So also is the huge problem posed by being curvaceous. The intriguing twists she experienced later in her life, as well as the premonitions that occurred to her on many occasions, give this memoir an element of suspense. Good narrative and an interesting plot further add to its gratifying nature. I can say with confidence that this book is a good addition to one's collection of gems in this genre.

Good work. Keep it up

Good work sister. We are proud of you and please continue shining.