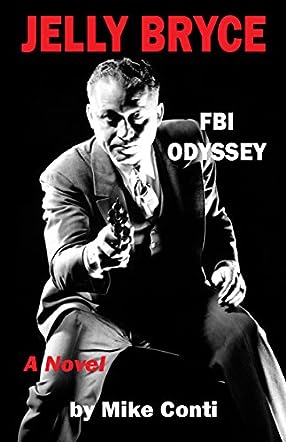 A second-generation police officer, Mike Conti retired as a lieutenant from the Massachusetts State Police after more than twenty-four years of service.

The President and founder of Saber Group, Inc., he also serves as Rangemaster and Physical Education Firearms Instructor for the Massachusetts Institute of Technology in Cambridge, MA.

Jelly Bryce: FBI Odyssey is #2 in a trilogy by author and veteran police office Mike Conti. The trilogy charts the life and times of real life law enforcement hero, Delf A (“Jelly”) Bryce. Apparently the unusual nickname originated as “Jellybean” because of his penchant for fancy clothes. Whereas the first in the series covers Jelly’s life from childhood to his time as an officer in the Oklahoma City Police Department, this book takes us further in his career to the FBI and the favourite son of his boss and mentor, J. Edgar Hoover. Although the story itself is historical fiction focusing on Bryce’s life and exploits, it reads more like a biography. As is demonstrated early on in the narrative, Bryce was somewhat of a prodigy with firearms from a very early age. By the time he joined the OCPD, he was already a legend in law enforcement circles, his reputation eventually coming to Hoover’s attention.

In the days of the Wild West, Bryce would have been classed as a gunslinger — but on the right side of the law. In 1945, Life magazine clocked Bryce’s draw and fire at two-fifths of a second. At the FBI, he advanced quickly through the ranks, at the same time gaining the respect of his fellow agents, developing a reputation for great instincts and investigative skills. Despite this, he is remembered in the Bureau more for his remarkable ability as a “quick draw” shooter. He would routinely toss a coin into the air, then draw whatever pistol he happened to be carrying, and shoot the coin out of the air. He was considered the FBI’s best trick shooter, even though he remained a field agent.

While Jelly Bryce: FBI Odyssey is, as noted above, a work of fiction, the meticulous research Mike Conti has put into his subject and the surrounding historical events renders the book a fascinating read, even if 1930s gangsters, guns, and dynamite thrown from speeding cars isn’t your thing. What Conti is writing about is history — it happened — only the dialogue is make believe. The reader is treated to remarkable details of the workings of the OCPD and the FBI, and those interested in ballistics won’t be disappointed either as guns and ammunition from that era are described in detail.

Yet, this is a novel and the action gets underway from the opening lines, at a time when Jelly is still a teenager. Conti’s narrative is so descriptive you can literally see the action as it unfolds and the dialogue could be a script for a fascinating movie. The characterisation is excellent, so no need to keep turning up earlier pages to see who’s who. The writing itself is flawless; the story easily flows from one scene to the next. If there was a downside for me, it was that I was disappointed when I arrived at the end. But then again, there’s another book on its way.

Jelly Bryce: FBI Odyssey (Jelly Bryce Trilogy Book 2) starts its story in 1934 and presents the reader with a very real look at the era. Jelly Delf Bryce is just leaving the Oklahoma City Police Department and joining the very prestigious FBI. Jelly’s gun skills and smart police work quickly make him a favorite of the head of the FBI, Mr. J. Edgar Hoover. As Jelly works himself up the ladder of success in the bureau, he is faced with life threatening situations and 'think on your feet to save your life' scenarios. Jelly comes face to face with the worst criminals of the day and tries his very best to please Mr. Hoover and win each battle. As the country faces the horrors of war, dealing with the Russians, Germans and Japanese, the FBI is working to keep America safe from all evils and Jelly is in the forefront of these plans.

If you enjoy reading about bad guys vs. good guys in our past history and are interested in the workings of the FBI, then Jelly Bryce: FBI Odyssey is a must-read for you. I did not read Book 1, but never felt like I was confused or missing any of the storyline. I was a little let down to realize I was at the end of the book. I do, however, look forward to picking up the pieces in Book 3. Mike Conti certainly offers an in-depth look at the workings of the FBI, the direction Hoover hoped to take it, and how to catch the bad guys. While this book is clearly described as fiction, I feel certain that there is a lot of truth in it. Jelly Bryce: FBI Odyssey is a good, historical fiction read.

Jelly Bryce: FBI Odyssey by Mike Conti is an 'in your face' adventure chronicling the life of a small time Oklahoma detective turned into one of the most feared and admired FBI agents; Delf “Jelly” Bryce. Via the character of detective Jelly Bryce, the author tells the story through the eyes of an FBI agent. From the very first chapter, Conti draws the reader into an action packed adventure with such vivid details; you picture yourself there. I immersed myself in this historical journey, from an officer's perspective, by looking up photos of the vehicles and weaponry of this important era. The author definitely has a talent for storytelling.

The most memorable passage from Conti’s novel, Jelly Bryce: FBI Odyssey, was the conversation Hoover and Bryce had about the art of war. “The game is the game, always has been and always will be. People don’t change. There are times in the world that we have to do what needs to be done," said Hoover to Jelly, “without being concerned about staying within the lines of conduct, often drawn arbitrarily by men who never have to deal with realities of this world.” A powerful statement that puts everything into perspective for the men and women who serve our country. I thoroughly enjoyed reading and learning about Hoover’s reign as the director of the FBI, and his contribution to society as a whole. I recommend this book to all readers for its historical facts and entertaining flow. I also look forward to reading the other books in this trilogy.