The Vampire Inside Me 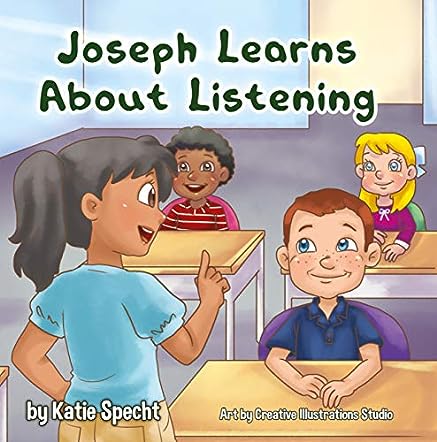 School is an exciting place to be. There are lots of things to distract an active young mind while trying to learn what is being taught. Joseph is excited about starting kindergarten. But, on his first day, he becomes so focused on his coloring project that he doesn’t hear the teacher when she calls him to join them for circle time. At the school library the next day, Joseph is so interested in the book he finds, he doesn’t hear his teacher when she calls the class to order for lunchtime. Notes go home and phone calls are made. Mom has several serious conversations with Joseph and he continues to try harder. His teacher has some ideas, too. Joseph really does want to learn, but first, he has to learn to listen.

Katie Specht’s picture book story, Joseph Learns About Listening: A children’s book about the importance of paying attention at school, is a clever way to introduce young readers to the importance of paying attention and following instructions. The plot follows young Joseph’s first days at school as he settles into an exciting new environment. Joseph is keen to learn, but, as the story evolves, it becomes evident that Joseph must learn first how and when to listen. The story is told in simple language so a young reader can follow along and it’s colorfully illustrated. The story is bright and cheery and with a positive message about school, listening and paying attention. Beautifully told.