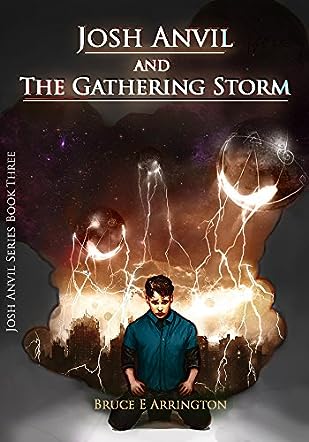 Bruce worked as a wildlife biologist for 15 years and a teacher for 16 years. His writing takes your average, everyday characters and upends their lives through unusual and powerful circumstances. His work includes young adult thrillers such as the Phalanx Blood series, the teen Josh Anvil series, the Birthday Wish books for children, and others.

Josh Anvil and the Gathering Storm is the third offering in Bruce E Arrington’s Josh Anvil Series. Our fourteen-year-old hero is back on Earth. No one believes his story, and he loses his credibility at school. His godlike powers that come from another world could only be accessed as long as the portals that connect to Earth from an alien source are open. Now that the portals are closed, Josh struggles in dealing with being powerless. On top of that, the FBI is on his trail and demands to have a talk with him. Throw in the impending threat of an alien invasion that he tries to warn everyone about, but no one listens. As Earth faces the serious peril of an alien race that plans to rectify what they deem the planet’s imbalance, Josh will have to deal with the ridicule of a disbelieving public to save them.

Josh Anvil and the Gathering Storm has excellent characters in spades. I like this series because Bruce E Arrington deviates from bestowing Josh with the maturity necessary for young heroes to wield their abilities with a good sense of responsibility. This makes for a great source of both internal and external conflict for Josh as a hero. Personally, I understand his lack of self-esteem as brought about by his dyslexia and his reactive predisposition toward negative stimuli. Yes, you might find it difficult to relate to him on this level, but Josh has a good heart, and his intentions are well-founded. As a stand-alone work, Arrington manages to convey a unified plot that flows organically. Despite possessing unusual powers, Josh is not spared from having his own share of teen existential angst. His situation pushes him to make realizations about himself, and perhaps we will see him grow as the series progresses. This is a young adult fantasy sci-fi series that deserves your attention.