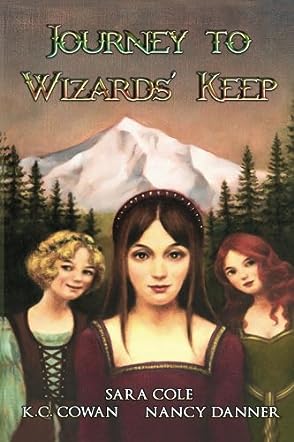 Journey to Wizards' Keep was written by three friends just for fun and forgotten for three decades! In 2013, KC dug it out, and began a three year job of rewriting it and getting it published.
Author Bios

KC Cowan has spent her life working in the media, as a reporter for KGW-TV, KPAM and KLX-radio, and as original host and story producer for an arts program on Public Television. She is also the author of two books: “The Riches of a City” the story of Portland, Oregon, and “They Ain’t Called Saints for Nothing!” with artist Chris Haberman. She is married and happily lives in her hometown.


Sara Cole is an officer with Clackamas County Sheriff’s Office, where she is the Crime Prevention Coordinator. Sara provides public outreach to citizens on topics such as Neighborhood Watch, ID Theft and Personal Safety. She also serves on many community coalitions, and is a board member of the Crime Prevention Association of Oregon. Sara is married and enjoys spending much of her free time with her two active grandchildren.


Nancy Danner is the daughter of a shoemaker and a teacher. Nancy is a teacher, and for the past fourteen years has taught in a blended class of hearing and hearing-impaired students. Nancy's love of music has her singing in church choirs, directing children's musicals, and writing songs for her students. Nancy's family includes two grown children, Sean and Clarice, a rescue dog named Hal, and a loving husband, Rodney.

I’ll be honest. I’m more used to the lone hero in a story. Sometimes it’s a girl, but usually it’s a guy. A story with four female protagonists is unusual for me. I haven’t seen that many in a long time and I read a lot. All this being said, Journey to Wizard’s Keep by K.C. Cowan, Sara Cole, and Nancy Danner works for me. I was worried about four heroines and three writers, but apparently, sometimes the more the merrier turns out to be true. I like magic and feudal societies. This setting made the three friends scenario more acceptable. I feel people were closer in those times than they are now. Especially if they are from the same small village and one or more of them are in trouble. It makes sense that this bond would be strong. Much stronger than girls from our time. It was interesting to compare the differences in camaraderie between girls and boys.

I liked Journey to Wizard’s Keep because the writing was good. There are three authors, but their styles blended seamlessly. I couldn't tell who wrote what unless they simply each took certain characters and wrote them. I don’t know, but the writing was smooth and I didn't feel any seams, or places where the style changed abruptly. The plot was good and the pace excellent. I liked the characters. It was a pleasant change of pace to have strong young girls as heroes. I think I would recommend it to young female readers everywhere.