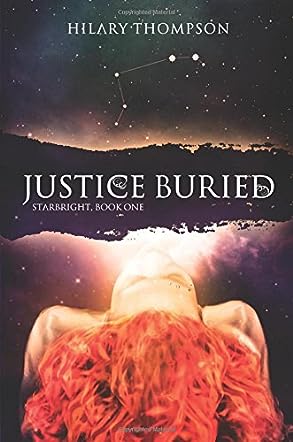 After trying on hats made for artists, architects, restaurant and retail workers, landscape designers, legal secretaries, and professional students, she retreated back to her first loves of education and writing.

Hilary now teaches high school full time, writes whenever and wherever she can, and reads as much as her eyes can handle. She also tries not to spoil her own independent, willful children or neglect her wonderful soul-mate of a husband too much. She tends to ignore laundry baskets and dirty dishes.

Justice Buried is a young adult fantasy novel by Hilary Thompson, and the first part of the Starbright series. Justice is the name given to a prophesied maiden who will come from the stars to save the three remaining cities upon a post-apocalyptic Earth. In the underground city of Asphodel, the people believe that sixteen-year-old Astrea is that maiden, and her whole life is under their control until she reaches her fated destiny. In a traditional but superbly effective tale of teenage rebellion, Trea breaks free of her life, her family and even her proposed marriage in order to show them that she knows, deep within, that she isn’t the chosen one. But, even as she rebels against her fate, fate itself shows her the power and potential of her future.

All young adult fiction should be written like this. Author Hilary Thompson is able to explore a full gamut of real and very important emotions, telling a gripping, exciting and heart-breaking tale without ever having to resort to graphic content that would offend younger readers. Justice Buried is extremely well-written and truly gripping in the sense that I couldn’t physically stop myself flicking to the next page. I particularly loved the carefully crafted mythology of the three cities, which opens every chapter and really adds to the author’s superb world-building. All of the characters were realistically portrayed, most especially the teens, and the zodiac-obsessed ways of the pseudo-religious leaders were delightfully off-putting. A five star read from beginning to end.

Justice Buried (Starbright) (Volume 1) by Hilary Thompson tells the story of a new world order. The world as we know it now ceased to exist in 2068, and one underground city at least survived. Three cities are said to remain, two above ground and one underground. Justice Buried is the story of the underground city of Asphodel. The prophecy was that in one hundred years a child born on the spring equinox and one born on the autumn equinox would venture out of the underground city and start a new city above ground. Astrea and Lexan are those children, but there are those who would prefer they did not reach their goals. Some in Asphodel don't believe that there are any people left above ground, and others believe there are. Things become complicated when Stian arrives in Astrea's hidden cave, as he actually comes from the surface. Can he be trusted? Astrea and Lexan find they must do things they never thought possible in order to save the city and the people they love.

The current world ends in 2068, which is not too far away, and in a manner that seems reasonable enough to be realistic, which makes the book that much more compelling to read. Hilary Thompson has written a story that will pull you in from the first page. The author blends coming of age, as the main characters, Astrea and Lexan are all of seventeen, with the struggles of truth and justice, what is right and wrong, how to balance family and community, ethics and morals. It is an amazing beginning to a three-part series that draws you in, keeps you reading and is fun, but at the same time, when you sit back and think about what they went through, it will have you thinking about the choices they had to make. Wonderful book for middle schoolers, young adults and adults as well.

In Justice Buried (Starbright) by Hilary Thompson, sixteen-year-old Astrea had been born into a position one may have called privileged, but she saw it more like a curse. As per a very old and trusted prophecy, she was next in line to be the First Leader of a city that had been locked away underground for over 100 years. As part of the prophecy, she was also destined to marry Lexan - a man she neither liked nor trusted. She initially became rebellious against the implications of the prophecy, but eventually started accepting her fate. However, many things did not add up and everyone was just giving her small bits and pieces of information, and telling her not to trust the other person. She was, however, determined to piece the puzzle together before her fate was sealed, but this would not be an easy task seeing how she did not know who to trust - not the man she was destined to marry, not even her own parents. As if her situation was not hard enough, an unprecedented visit from an enchanting guest made everything even more complex. Plus, the existing First Leader was in no way ready to give up her seat and this put Astrea's life in danger.

Justice Buried (Starbright) by Hilary Thompson is a flawlessly written fantasy story that had me on the edge of my seat from the first page to the very last. The suspense started building straight from the very first chapter and kept getting more intense as I swiftly went through the pages in a bid to discover who could be trusted and who could not; at one point everyone felt suspicious. Justice Buried is a one of a kind fantasy story and Hilary Thompson brought it to life beautifully with her flawless writing, compelling characters, and an intriguing setting. The concept of the underground city is so unique and so out of this world and it does not feel far-fetched at all. Hilary Thompson made it seem very real and believable, without a doubt. Justice Buried is the kind of story you remember for a very, very long time. I cannot wait to see where Book 2 takes us.