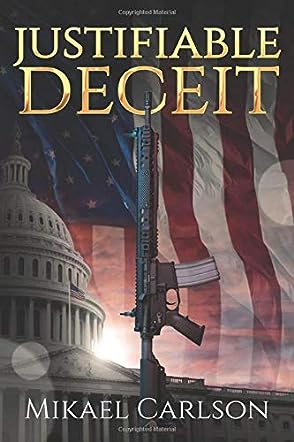 In the center of a well-executed blend of modern politics, media power, self-serving motivations, coverups, murder, and gun violence, author Mikael Carlson has placed a couple of female protagonists; journalist Tierra Campos and FBI Special Agent Victoria Larsen. Tierra's and Victoria’s paths intersect when they realize they are both looking for the same thing: the motivation behind a mass murder, something neither law enforcement nor the FBI ever established. Was the truth covered up? If so, by whom and why? And then there’s the media darling, gun-control activist and speaker, Ethan Harrington. How did he, covered in blood but unscathed, manage to escape the gunman’s killing spree? Why are there no video recordings of the event? And why is he now the spokesperson for a powerful female senator, Alicia Standish, who hopes to win the presidency with her gun-control bill? As Tierra and Victoria dig deeper for information and begin discovering startling truths, their individual careers are threatened but, worse yet, their own lives are in danger. When a state governor who is pro gun control, is gunned down during a rally, all hell breaks loose. The events, the people involved and the suspected coverups trigger a media frenzy, catapulting Justifiable Deceit to its brilliant, hoped-for ending.

I’m not all that sure if the word “unputdownable” has made it into the dictionary yet, but honestly, it’s the best word to describe my reaction to Justifiable Deceit by Mikael Carlson. What a riveting and unique read this is. From its heart-stopping introductory chapter in which a crazed high school student goes on a shooting spree leaving 66 people dead to its most satisfying last pages, this book kept me so enthralled I read it in just over 48 hours. Unputdownable! Carlson’s stylistic approach to this novel is intriguing: in short chapters with lots of dialogue, he skips around between the characters so readers can see more closely into their minds and motivations, but always giving us just enough to keep us reading...and do we ever. He slows the pace every so often to give us an Edward R Morrow look into what’s happening. By doing so, Justifiable Deceit reflects what is probably a daily activity for most of us: catching up with the latest news and insights, shaking our heads at what we read and hear, and always wondering just how much of it should we believe. There are many words to describe Justifiable Deceit: high-speed, riveting, realistic, and thought-provoking. But the best word is still “unputdownable”!