One Bad Day After Another Dancing In The Wind 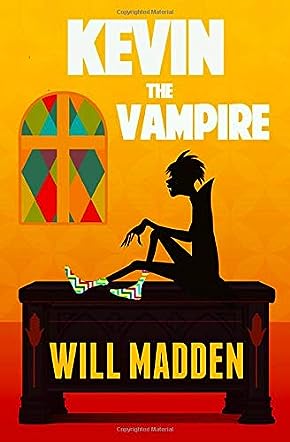 I am a Nashville based writer, and a proud native of the Bronx, New York. I hold a degree in something ridiculous I've never used from a fancy institution of higher education. By day I perform manual labor so that by night I have enough brain power left to deliver the hard-hitting truths about the struggles of imaginary monsters. I study foreign languages for fun. All my pets are house plants.

Will Madden has created a delightful short novella about a vampire called Kevin. No longer known as Gaius Severus, Guy, Cevinus, or Qehveenoz; now it's just Kevin. Being Kevin is entirely appropriate for his new environs within the Greater American Corn Belt. Almost by accident, Kevin the Vampire takes up residence in an old abandoned church, St. Agnews. The church is still furnished with long abandoned furniture and an organ which Kevin uses to sing Billy Joel parody songs with a vampire twist.

Engaging in staring contests with the crucified Christ (always a draw until Kevin gets bored), checking out any new nail polish colors at the local Walgreens (the only store open at night), or sampling the pedestrian fare of corn-fed blood, Kevin has an idyllic existence until a vampire hunter comes to town. Edvard von Heusen, said vampire hunter, has come specifically to find Kevin and make him an offer he'd best not refuse. No matter what happens next, Kevin's life (or death?) will never be the same.

I enjoyed Kevin the Vampire from beginning to end. Will Madden's witty approach to telling Kevin's story kept me engaged throughout. Flawlessly constructed, the story is well-told and fresh, a standout from the often-worn genre of common vampire stories. The ending was unexpected and interesting; altogether what you would expect from the Kevin you have come to know. If you enjoy vampire stories which don't take themselves too seriously and are easy to read within a couple of hours, Kevin the Vampire is a fine choice!