Love in Doom and Secession by A M Thomas 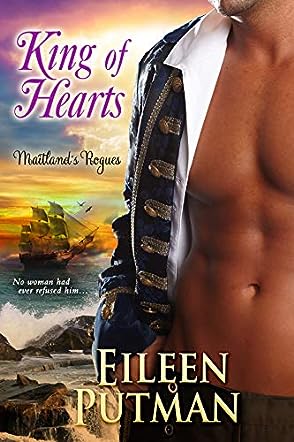 I've written a dozen romances set in the Regency period (1811-1820), my favorite. King of Hearts is a longer British historical and was utterly thrilling to write. It's a bit unhinged, fast-paced, funny, and deeply emotional.

The hero, Gabriel Sinclair, is a rogue among rogues, with no interest in permanence and every interest in seduction. Louisa Peabody is his temperamental opposite, who has been rescuing mistreated women and succeeding only some of the time. Most importantly, she loathes any man’s touch.

Let’s face it: When a guy no woman has ever refused is forced to help a feisty widow who can’t abide anything he stands for, it’s going to be a rocky road. Both characters are a bit out there, both given to extremes, and I simply let them whirl me through their universe.

King of Hearts has its roots in a story I’d written years ago. But it has all new characters, subplots and story arcs. And it’s fun! Gabriel is given to gallows humor (literally), and Louisa is his perfect foil, a woman who won’t let anything stand in her way and who long ago forgot how to laugh.

This is the launch of my new series, League of Rogues, about a daring group of rogues who worked clandestinely for England during the Napoleonic Wars. Hardened and deadly, they have no use for love—until it ensnares them.

I love a good, well-written or well-told historical romance, whether it is a book or a movie. There is something about them that makes them easy to read and leaves me with a feeling of satisfaction. The world can be a terrible place, but romance makes it just a little bit more bearable, makes it just the tiniest bit sweeter. I really enjoyed King of Hearts by Eileen Putman. It put me in that sweet spot that only a good romance can put me in. I like my romantic heroes to have two main characteristics. They need to be brave and they need to be smart. I like my romantic heroines to be smart and fiery. I was satisfied on all counts by King of Hearts. I liked the hero, the heroine, and the point and place in history where the story takes place.

Not for nothing is Gabriel Sinclair known as the 'king of hearts.' He is a bit of a rogue and a scoundrel, but this persona hides a very serious and complicated man. This is why when he meets Louisa Peabody it is only a matter of time and circumstance before some kind of potent reaction occurs. I liked this book. These are my kind of people and this is my kind of historical period. The characters are well matched. The plot is well thought out and well written. The writing fits the book and the genre perfectly. Eileen Putman has the sense of character, romance, and timing that a great romance writer needs to keep readers interested.