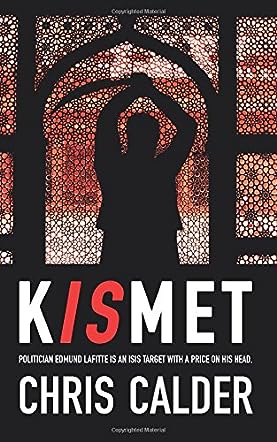 A writer all my life, I came late to novels. For me, writing is delicious agony. I know that readers of fiction expect to be diverted and entertained. I am living proof that there is life after seventy, that brain cells kept busy do not rot, that life-threatening cancer can be totally defeated and that a long and eventful life is a rich source for the material that is the stuff of interesting and engaging fiction. When asked how long I can go on writing, I reply, “Ask me again in twenty years’ time!”

You, dear Reader, are the most important person in my career as a writer. Without you, there would be no need for writers. And that includes me. That means that whatever I write should be what you want to read, so this is a plea addressed directly to you.

kISmet is my fourth novel, the result of over two years’ hard work. It’s the best I could make it. But it isn’t perfect; it can’t be. I believe that there is nothing ever written that could not have been made better in one way or another.

When you read this book, you may have an opinion as to how it could have been better. Please tell me; listening to you is the only way I can improve what I do. I always respond promptly and personally to every email I receive from readers.

I would love to hear from you.

Kismet is a political action thriller with more than a hint of the police procedural about it. The story follows Edmund Lafitte, a British Member of Parliament, drawn almost incidentally into the activities of Islamic State in the UK when he tries to help a constituent whose journalist son has been kidnapped in Syria. His activities on behalf of the kidnapped man draw the attention of a frightened Muslim businessman being forced to pay ‘protection money’ to a radical imam preaching sedition from his mosque in Donfield, a fictional Yorkshire city which I assume is meant to be an amalgam of Doncaster and Sheffield. When the Muslim businessman is found brutally beheaded within a day of meeting Edmund, the only thing found on him is Edmund’s business card, tucked into his pocket. Whether he likes it or not, Edmund is now involved. Consulting with Detective Inspector Royce, the police officer assigned to the case, the pair is determined to get to the truth and expose the activities of radical Islamists in the UK. The story follows the parallel paths of the two men, Edmund in London and Royce in Yorkshire, as they try to painstakingly untangle the web of lies and terror… before Edmund becomes IS’s next victim.

Kismet is an enthralling read full of gripping drama and high action moments. It feels incredibly real, especially given recent events in the UK. Chris Calder knows his topic, and obviously the atmosphere in the northern cities, well; I could almost picture the weary terraces of Sheffield in my mind, the ethnic shops lining Bradford’s streets, the wariness that pervades the atmosphere as people from many different cultures try to live side by side. Despite the subject matter, Muslims are not demonised in the book, which I was half-afraid of going in. It is made clear by the actions of several characters that radical Islam is not the way of life that most Muslims seek, and the author’s respect for the culture clearly shows through. The protagonists are well-drawn and not caricatures; I found Edmund very sympathetic and was rooting for him throughout the story, as well as the beleaguered police detectives doing their best in difficult circumstances where witnesses were terrified into silence.

Kismet is not only a great thriller, it is a fascinating examination of the difficulties plaguing many European countries struggling to assimilate their recent intake of refugees and migrants, and balance the security of their citizens with the cultural changes brought by newcomers, especially since not all those newcomers have the purest of intentions. The story had plenty of twists and turns, along with some intriguing reminders that not everything is black and white in terms of good and evil; there are plenty of moral shades of grey out there. I highly recommend Kismet to anyone who enjoys a political thriller or a good police procedural!

Kismet by Chris Calder is a political, terrorist thriller with very strong and interesting characters in a well-plotted and utterly engaging story. The first message that Edmund Lafitte, a British Member of Parliament, receives is in the form of a letter and the words stand out powerfully, a desperate plea for help. A frightened Muslim businessman visits Lafitte and ends up murdered and dismembered, left with no identification but a business card from the politician. After a terrorist attack on a crowd leaving a football match, Lafitte makes a passionate speech in the House of Commons, but that makes him a hunted man. Now, he has to watch his every step, for even an innocent passersby can claim the price that is on his head. Does he have what it takes to escape skilled terrorists determined to bring him down? And can he live long enough to find out why?

I was hooked by the dramatic opening of this novel and became very intrigued by the characters. The fact that someone would write a letter with the words “They are going to kill me. No one will listen. You must help me” already creates a sense of urgency in the reader and makes them want to find out what could have gone wrong and what will happen next. The writing is very accessible, punctuated by natural-sounding dialogues that are well-crafted to enhance the plot, deepen characterization, and fuel the conflict. Readers will be keen to find out what happens to Lafitte, a very powerful, yet vulnerable character. I loved the writing and Chris Calder has a great gift for plot and setting. Kismet features a gripping conflict with a satisfying denouement.

Kismet by Chris Calder is a fiction thriller written within a current-day terrorist framework. British Member of Parliament Edmund Lafitte is visited by a frightened Muslim businessman who is seeking help. Hours later the man is murdered - decapitated in an act of brutal savagery. The victim’s body has been stripped of identification, but Lafitte’s card, bearing a bloody thumbprint, has been left in the jacket. Why? is the question asked by Lafitte himself, the British Police and the Specialist Operations branch of the Counter Terrorism Command. When a bomber attacks a crowd of fans leaving a football match, Lafitte makes an impassioned speech in the House of Commons, demanding the eradication of Islamic State, which has claimed responsibility. Shortly after, a suicide bomber makes an attempt on Lafitte’s life. It fails, but now he knows he is a target. With a price on his head, Lafitte and the SO15 must find a way to save his life and find the perpetrators of these hideous acts.

Kismet is a riveting read. Chris Calder has a talent for presenting stories from multiple points of view which give the reader a complete picture of the thoughts of characters and the intricacies of the British Police and of Counter Terrorism Command - the workings of which I knew very little. The plot is complex and unsettlingly believable. The characters are so authentic that I was on the edge of my seat, worrying about their predicament as the suspense built throughout the book until the final chapter. I found this book hard to put down and resented everyday life encroaching on my reading time! If you are looking for a gripping read that will have you biting your nails in anticipation of what will happen next, I recommend Kismet by Chris Calder.